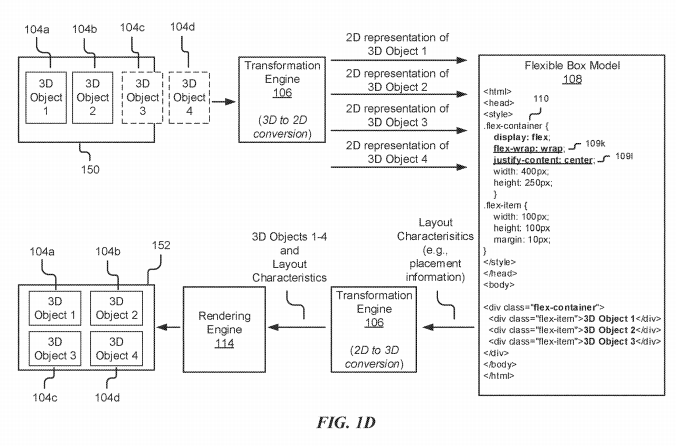 Cascading style sheets (CSS) is a style sheet language used for describing the presentation of a document written in a markup language, such as Hyper Text Markup Language (HTML), Extensible HTML (XHTML), Extensible Markup Language (XML), etc. CSS describes how elements should be rendered on a display screen, on paper, in speech, or on other media. Most often CSS is used to set the visual style of web pages and user interfaces written in various markup languages. It is a technology used by most websites to create visually engaging webpages, user interfaces for web applications, and user interfaces for many mobile applications. CSS has a layout mode called a flexible box layout (or flexbox) designed for laying out complex applications and web pages. The flexible box layout of CSS has more flexibility for distributing space and aligning content in way that web applications and complex web pages often need. Content or layout of a social-networking website may be arranged using the flexible box layout.

A mobile computing device–such as a smartphone, tablet computer, or laptop computer–may include functionality for determining its location, direction, or orientation, such as a GPS receiver, compass, gyroscope, or accelerometer. Such a device may also include functionality for wireless communication, such as BLUETOOTH communication, near-field communication (NFC), or infrared (IR) communication or communication with a wireless local area networks (WLANs) or cellular-telephone network. Such a device may also include one or more cameras, scanners, touch screens, microphones, or speakers. Mobile computing devices may also execute software applications, such as games, web browsers, or social-networking applications. With social-networking applications, users may connect, communicate, and share information with other users in their social networks.

Particular embodiments disclose a method for dynamically arranging a layout of a page comprising three-dimensional (3D) objects using a two-dimensional (2D) flexible box model (interchangeably referred to herein as a flexbox). A flexbox in particular embodiments may be a dynamic CSS layout model that provides for the arrangement of various objects or elements on a page (e.g., webpage) such that the objects behave predictably when the page layout must accommodate different screen sizes and different display devices. For example, when a page switches its orientation from a landscape to a portrait mode, then flexbox enables the boxes, spacings between the boxes, text, tabs, etc. in the page to automatically adjust according to the portrait mode (e.g., spacing between boxes reduced, boxes arranged column-wise instead of row-wise, objects stacked to each other, objects stretched to fit certain area, etc.). Particular embodiments enable 3D objects to be dynamically arranged using the flexible box model. This may especially be valuable within the virtual reality and augmented reality contexts where there may be various 3D objects.

In particular embodiments, the way the 3D objects leverage 2D flexbox is by representing 3D objects in 2D, such as by taking a cross-section or projection of the 3D objects into 2D space to generate corresponding 2D objects. Various projection techniques may be used to project 3D points to a 2D plane. Some of the standard projection techniques may include, for example, orthographic projection, perspective projection, etc. Once the corresponding 2D points or objects of the 3D objects are generated, they may be placed into the flexbox (e.g., the 2D representations of the 3D objects are put into flex containers). Using the flexbox, the layout of the various objects (2D representations of 3D objects) regarding how they should be presented (or where they need to be rendered) on a page can be defined. For example, length, width, size, X-Y coordinates, orientation, relative spacing, etc. can be defined for the generated 2D objects using the flexbox. The layout definitions can then be transferred to a rendering engine for it render the various objects (2D and 3D) on a page. The rendering engine may apply some transformation techniques on the 2D representations of the 3D objects to render them in their original state (e.g., replace the 2D object(s) with corresponding 3D representation(s) at the location defined by the flexbox). In some embodiments, every time there is a change in layout/orientation on a page, the rendering engine may call the flexbox, which provides the new position, size, coordinates, etc. information to the rendering engine for it to render an updated scene.