Patent: Policies And Architecture To Dynamically Offload Vr Processing To Hmd Based On External Cues 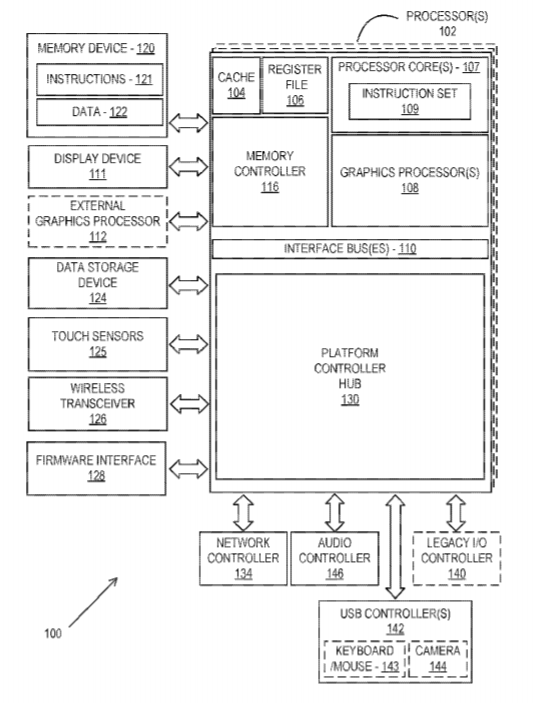 [0003] Virtual reality (VR) refers to data processing technologies that replicate a real or imagined environment by simulating a user’s physical presence in that environment and, in some implementations, the user is provided with the ability to interact with the environment. Many current VR environments are displayed either on a computer screen or with a special virtual reality headset. Some simulations include additional sensory information such as sound through speakers or headphones targeted towards VR users.

[0004] The VR processing pipeline may involve post processing operations that are not typically performed by 3D graphics applications. For example, these operations may include barrel distortion (BD) correction, asynchronous time warp (ATW), chromatic aberration correction (CAC). These operations can lead to frame drops and latencies which may lead to a poor user experience. Lengthy delays in updating the user’s perspective based on head motion can cause simulation sickness, such as headaches, nausea, and dizziness.

[0005] A better understanding of the present invention can be obtained from the following detailed description in conjunction with the following drawings, in which:

[0006] FIG. 1 is a block diagram of a processing system, according to an embodiment;

[0010] FIG. 5 is a block diagram of another embodiment of a graphics processor;

[0013] FIG. 8 is a block diagram of another embodiment of a graphics processor;

[0014] FIG. 9A is a block diagram illustrating a graphics processor command format according to an embodiment;

[0015] FIG. 9B is a block diagram illustrating a graphics processor command sequence according to an embodiment;

[0016] FIG. 10 illustrates exemplary graphics software architecture for a data processing system according to an embodiment;

[0017] FIG. 11A is a block diagram illustrating an IP core development system that may be used to manufacture an integrated circuit to perform operations according to an embodiment;

[0018] FIG. 11B illustrates a cross-section side view of an integrated circuit package assembly, according to some embodiments;

[0019] FIG. 12 is a block diagram illustrating an exemplary system on a chip integrated circuit that may be fabricated using one or more IP cores, according to an embodiment;

[0020] FIGS. 13A-13B are block diagrams illustrating exemplary graphics processors for use within an SoC, according to embodiments;

[0023] FIG. 16 illustrates time warping performed in accordance with one embodiment;

[0024] FIG. 17 illustrates one embodiment of an architecture for performing time warping;

[0025] FIG. 18 illustrates another embodiment of an architecture for performing time warping;

[0026] FIG. 19 illustrates a method in accordance with one embodiment;

[0028] FIGS. 21 and 22 illustrate different sets of execution resources which may be allocated at various stages of the pipeline, in accordance with various embodiments;

[0029] FIG. 23 illustrates one embodiment of an architecture for performing offloading of processing to a head mounted display;

[0030] FIG. 24 illustrates one embodiment of an architecture for performing offloading of processing to a head mounted display;* and*

[0031] FIG. 25 illustrates a method in accordance to one embodiment.

[0032] FIG. 26 illustrates a method in accordance to another embodiment.

[0033] In the following description, for the purposes of explanation, numerous specific details are set forth in order to provide a thorough understanding of the embodiments described below. It will be apparent, however, to one skilled in the art that the embodiments may be practiced without some of these specific details. In other instances, well-known structures and devices are shown in block diagram form to avoid obscuring the underlying principles of the embodiments.

[0037] In one embodiment the system 100 can include, or be incorporated within a server-based gaming platform, a game console, including a game and media console, a mobile gaming console, a handheld game console, or an online game console. In some embodiments the system 100 is a mobile phone, smart phone, tablet computing device or mobile Internet device. The processing system 100 can also include, couple with, or be integrated within a wearable device, such as a smart watch wearable device, smart eyewear device, augmented reality device, or virtual reality device. In some embodiments, the processing system 100 is a television or set top box device having one or more processors 102 and a graphical interface generated by one or more graphics processors 108.

[0040] In some embodiments, one or more processor(s) 102 are coupled with one or more interface bus(es) 110 to transmit communication signals such as address, data, or control signals between processor 102 and other components in the system 100. The interface bus 110, in one embodiment, can be a processor bus, such as a version of the Direct Media Interface (DMI) bus. However, processor busses are not limited to the DMI bus, and may include one or more Peripheral Component Interconnect buses (e.g., PCI, PCI Express), memory busses, or other types of interface busses. In one embodiment the processor(s) 102 include an integrated memory controller 116 and a platform controller hub 130. The memory controller 116 facilitates communication between a memory device and other components of the system 100, while the platform controller hub (PCH) 130 provides connections to I/O devices via a local I/O bus.

[0042] In some embodiments the platform controller hub 130 enables peripherals to connect to memory device 120 and processor 102 via a high-speed I/O bus. The I/O peripherals include, but are not limited to, an audio controller 146, a network controller 134, a firmware interface 128, a wireless transceiver 126, touch sensors 125, a data storage device 124 (e.g., hard disk drive, flash memory, etc.). The data storage device 124 can connect via a storage interface (e.g., SATA) or via a peripheral bus, such as a Peripheral Component Interconnect bus (e.g., PCI, PCI Express). The touch sensors 125 can include touch screen sensors, pressure sensors, or fingerprint sensors. The wireless transceiver 126 can be a Wi-Fi transceiver, a Bluetooth transceiver, or a mobile network transceiver such as a 3G, 4G, or Long Term Evolution (LTE) transceiver. The firmware interface 128 enables communication with system firmware, and can be, for example, a unified extensible firmware interface (UEFI). The network controller 134 can enable a network connection to a wired network. In some embodiments, a high-performance network controller (not shown) couples with the interface bus 110. The audio controller 146, in one embodiment, is a multi-channel high definition audio controller. In one embodiment the system 100 includes an optional legacy I/O controller 140 for coupling legacy (e.g., Personal System 2 (PS/2)) devices to the system. The platform controller hub 130 can also connect to one or more Universal Serial Bus (USB) controllers 142 connect input devices, such as keyboard and mouse 143 combinations, a camera 144, or other USB input devices.

[0044] FIG. 2 is a block diagram of an embodiment of a processor 200 having one or more processor cores 202A-202N, an integrated memory controller 214, and an integrated graphics processor 208. Those elements of FIG. 2 having the same reference numbers (or names) as the elements of any other figure herein can operate or function in any manner similar to that described elsewhere herein, but are not limited to such. Processor 200 can include additional cores up to and including additional core 202N represented by the dashed lined boxes. Each of processor cores 202A-202N includes one or more internal cache units 204A-204N. In some embodiments each processor core also has access to one or more shared cached units 206.

[0045] The internal cache units 204A-204N and shared cache units 206 represent a cache memory hierarchy within the processor 200. The cache memory hierarchy may include at least one level of instruction and data cache within each processor core and one or more levels of shared mid-level cache, such as a Level 2 (L2), Level 3 (L3), Level 4 (L4), or other levels of cache, where the highest level of cache before external memory is classified as the LLC. In some embodiments, cache coherency logic maintains coherency between the various cache units 206 and 204A-204N.

[0050] The exemplary I/O link 213 represents at least one of multiple varieties of I/O interconnects, including an on package I/O interconnect which facilitates communication between various processor components and a high-performance embedded memory module 218, such as an eDRAM module. In some embodiments, each of the processor cores 202A-202N and graphics processor 208 use embedded memory modules 218 as a shared Last Level Cache.

[0055] In some embodiments, GPE 310 includes a 3D pipeline 312 for performing 3D operations, such as rendering three-dimensional images and scenes using processing functions that act upon 3D primitive shapes (e.g., rectangle, triangle, etc.). The 3D pipeline 312 includes programmable and fixed function elements that perform various tasks within the element and/or spawn execution threads to a 3D/Media sub-system 315. While 3D pipeline 312 can be used to perform media operations, an embodiment of GPE 310 also includes a media pipeline 316 that is specifically used to perform media operations, such as video post-processing and image enhancement.

[0056] In some embodiments, media pipeline 316 includes fixed function or programmable logic units to perform one or more specialized media operations, such as video decode acceleration, video de-interlacing, and video encode acceleration in place of, or on behalf of video codec engine 306. In some embodiments, media pipeline 316 additionally includes a thread spawning unit to spawn threads for execution on 3D/Media sub-system 315. The spawned threads perform computations for the media operations on one or more graphics execution units included in 3D/Media sub-system 315.

[0059] FIG. 4 is a block diagram of a graphics processing engine 410 of a graphics processor in accordance with some embodiments. In one embodiment, the graphics processing engine (GPE) 410 is a version of the GPE 310 shown in FIG. 3. Elements of FIG. 4 having the same reference numbers (or names) as the elements of any other figure herein can operate or function in any manner similar to that described elsewhere herein, but are not limited to such. For example, the 3D pipeline 312 and media pipeline 316 of FIG. 3 are illustrated. The media pipeline 316 is optional in some embodiments of the GPE 410 and may not be explicitly included within the GPE 410. For example and in at least one embodiment, a separate media and/or image processor is coupled to the GPE 410.

[0064] In some embodiments, graphics core array 414 is scalable, such that the array includes a variable number of graphics cores, each having a variable number of execution units based on the target power and performance level of GPE 410. In one embodiment the execution resources are dynamically scalable, such that execution resources may be enabled or disabled as needed.