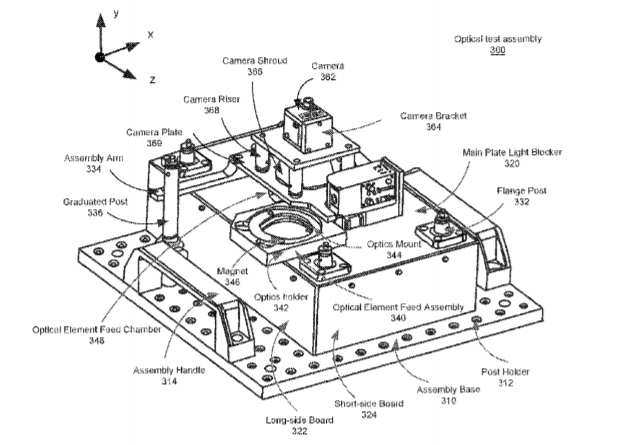 The disclosure relates generally to testing optical components, and specifically to systems for performing quality assurance tests on optics for head-mounted displays (HMDs).

In the context of an HMD, optical contrast (or contrast) indicates how well a HMD separates brightness and darkness in images presented to a user of the HMD. However, in this context, contrast is affected by different components of the HMD (e.g., display, optics, etc.) and it is difficult to quantitatively determine how each of the individual components of an HMD affects contrast. Additionally, while standardized test patterns (e.g., American National Standards Institute (ANSI) contrast pattern) exist that facilitate measurement of contrast, there is no standardized tests or systems to measure contrast, let alone in the context of HMDs.

An optical evaluation workstation is designed to simulate the exact environment of a HMD to test the optical qualities of its viewing optics.

Some adjustment methods are also applied in the optical evaluation workstation to generate effective performances. The position of the test pattern assembly is calibrated to be vertically centered consistent with the testing viewing optics and with the camera. The physical distances between different components in the optical test assembly can also be adjusted conveniently and accurately to simulate the exact environment inside a HMD. In some embodiments, these physical distances are strictly controlled to simulate the amount of light that can go into a user’s eye to correlate well to human’s visual performance.