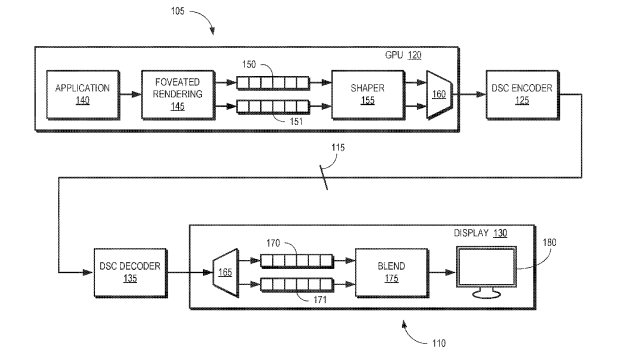 The limited bandwidth of current standard transmission protocols (e.g. DisplayPort) can become a bottleneck for uncompressed image data produced by high-resolution applications. For example, a Ultra High Definition (UHD) display at 60 frames per second with a 30-bit color depth requires a data rate of about 17.3 gigabits per second, which is the current limit of the DisplayPort specification. Higher interface data rates demand more power, can increase the interface wire count, and require more shielding to prevent interference with the device’s wireless services. These attributes increase system hardware complexity and weight, which is particularly undesirable in an HMD that is worn by a user. Graphics processing systems can therefore compress the display stream using techniques such as display stream compression (DSC), which is a standardized, visually lossless method of performing inline video compression for standard displays. A DSC encoder includes a frame buffer to store pixel values for an incoming frame, a line buffer to store values of a line of reconstructed pixel values, and a rate buffer to store the output bitstream. Dimensions of the buffers correspond to dimensions of images in the display stream. For example, each line in a buffer can store values for 1280 pixels to correspond to the number of pixels in a line of a 1280.times.1280 image. A DSC decoder implements a complementary set of buffers.