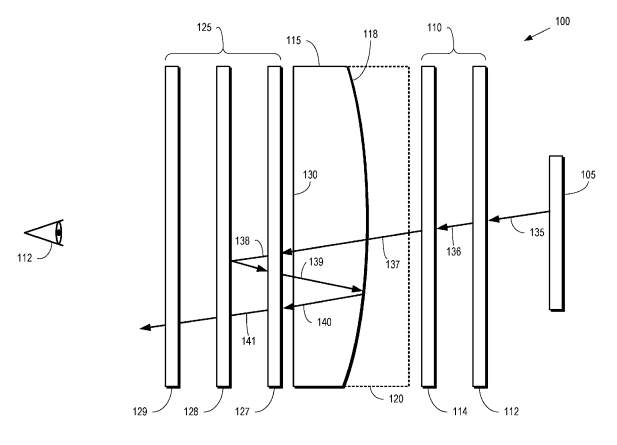 Immersive virtual reality (VR) and augmented reality (AR) systems typically utilize a head mounted display (HMD) device that presents stereoscopic imagery to the user so as to give a sense of presence in a three-dimensional (3D) scene. Conventional HMD devices implement either a single flat display that is separated into two independent display regions, one for the left eye and one for the right eye of the user, or a pair of independent flat displays, one for each eye of the user. The conventional HMD also includes an optical system that focuses the entire image of the display into the user’s eyes. The optical system includes singlet lenses, such as aspheric lenses or Fresnel lenses, which have focal lengths of about 35 millimeters (mm) or more. Neither type of lens provides the level of optical performance required for a high-quality VR or AR experience. Singlet aspheric lenses generate a relatively large amount of chromatic aberration, field curvature, and astigmatism. Fresnel lenses generate a relatively large amount of chromatic aberration and they produce Fresnel artifacts, such as stray light from total internal reflection on the Fresnel facets and ghost images due to manufacturing errors at the Fresnel facets.

Furthermore, singlet lenses such as aspheric lenses and Fresnel lenses have a relatively long back focal distance, which increases the distance between the lens and the display. Long back focal distances result in a bulky, front-heavy HMD that has a high moment of inertia. The singlet lens can be constructed with a shorter lens focal length. However, the lens magnification is inversely proportional to the lens focal length. The lens magnification therefore increases as the lens focal length decreases. Depending on the pixel resolution of the display, increasing the lens magnification can cause the viewer to perceive pixelation in the magnified image of the display. Furthermore, short focal length magnifiers are more difficult to design, typically require more optical elements to manage increasing optical aberrations, and are sensitive to optical/mechanical tolerances and eye positioning.