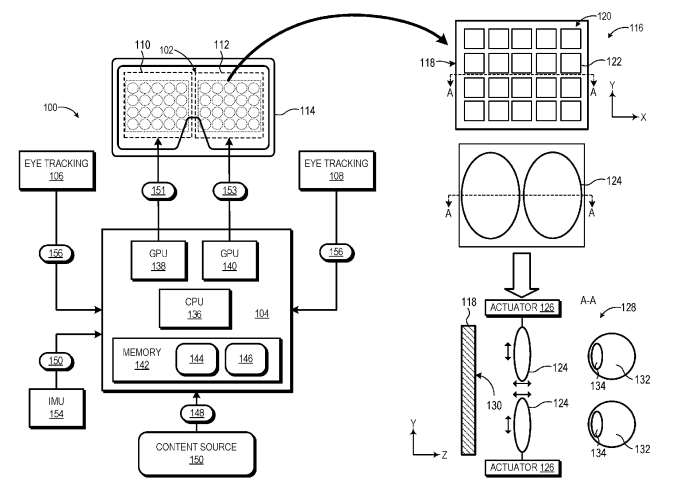 Head-mounted displays (HMDs) and other near-eye display systems can utilize a near-eye lightfield display or other computational display to provide display of three-dimensional (3D) graphics. Generally, the near-eye lightfield display employs one or more display panels and a number of lenses, pinholes, or other optical elements that overlie the one or more display panels. A rendering system renders an array of elemental images, with each elemental image representing an image or view of an object or scene from a corresponding perspective or virtual camera position. Such near-eye lightfield displays typically exhibit a disparity between vergence (i.e., simultaneous movement of the eyes in opposite directions to maintain binocular fixation of eye gaze on objects at different distances) due to the physical surface of the display panel and accommodation (i.e., changing the focal power of the lenses in the eyes) due to the focal point in simulated graphics of the HMDs.

In natural viewing (as opposed to viewing a virtual scene), vergence and accommodation requirements are consistent with one another: looking at a nearer object requires convergence and an increase in lens focal power, while looking at a farther object requires divergence and a decrease in focal power. Accordingly, and because the distances to which the eyes converge and accommodate are generally the same, the two responses are coupled such that changes in vergence produce changes in accommodation, and vice versa. However, conventional near-eye display systems often encounter vergence-accommodation conflicts when distance from the display panel (which is generally fixed) differs from the virtual depth of objects presented on the display panel (which generally varies with the content), resulting in discomfort and fatigue for the viewer.