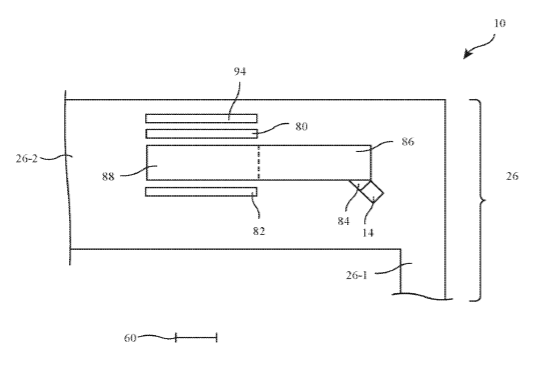 [0001] This application claims the benefit of provisional patent application No. 62/860,721, filed Jun. 12, 2019, which is hereby incorporated by reference herein in its entirety.

[0009] FIG. 1 is a schematic diagram of an illustrative electronic device such as a head-mounted display device in accordance with an embodiment.

[0010] FIG. 2 is a top view of an illustrative head-mounted device in accordance with an embodiment.

[0012] FIG. 4 is a cross-sectional side view of an illustrative spatially addressable adjustable optical component in accordance with an embodiment.

[0013] FIG. 5 is a top view of an illustrative electrode layer in a spatially addressable adjustable optical component in accordance with an embodiment.

[0014] FIG. 6 is a top view of another illustrative electrode layer in a spatially addressable adjustable optical component in accordance with an embodiment.

[0015] FIG. 7 is a top view of an illustrative spatially addressable adjustable optical component in accordance with an embodiment.

[0016] FIG. 8 is a top view of an illustrative layer with electrical anisotropy in accordance with an embodiment.

[0017] FIG. 9 is a top view of another illustrative layer with electrical anisotropy in accordance with an embodiment.

[0018] FIGS. 10 and 11 are top views of illustrative edge portions of layers in spatially addressable adjustable optical components in accordance with an embodiment.

[0021] Adjustable optical components may have a layer of electrically adjustable material such as a liquid crystal layer sandwiched between first and second electrode layers. By applying electric fields to selected contacts along the edges of the electrode layers, a desired electric field can be created through the layer of adjustable material in a location of interest. To reduce diffraction artifacts and other undesired visual artifacts that might arise from strips of electrode material, the electrode layers may be formed from transparent conductive layers that exhibit electrical anisotropy.

[0022] In some embodiments, a head-mounted device may include a lens system that includes an adjustable lens and/or fixed component(s) such as one or more fixed lenses. An adjustable lens system may be adjusted dynamically to accommodate different users and/or different operating situations. Adjustable light modulators may be used to selectively darken parts of a user’s field of view. If, as an example, a head-mounted display system is being used to display computer-generated content that overlaps real-world objects, the brightness of the real-world objects can be selectively decreased to enhance the visibility of the computer-generated content. In particular, a spatially addressable adjustable light modulator may be used to generate a dark region that overlaps a bright real-world object that is overlapped by computer-generated content in the upper right corner of a user’s field of view (as an example).

[0030] User input and other information may be gathered using sensors and other input devices in input-output devices 22. If desired, input-output devices 22 may include other devices 24 such as haptic output devices (e.g., vibrating components), light-emitting diodes and other light sources, speakers such as ear speakers for producing audio output, and other electrical components. Devices 24 may include one or more adjustable optical components such as spatially addressable adjustable optical components formed from electrode layers with transparent conductive material exhibiting electrical anisotropy. Device 10 may include circuits for receiving wireless power, circuits for transmitting power wirelessly to other devices, batteries and other energy storage devices (e.g., capacitors), joysticks, buttons, and/or other components.

[0040] During operation, control circuitry 12 may adjust the voltages Vapplied applied to the contacts of component 94. By adjusting the locations of the changes in voltage Vapplied in this way (e.g., by supplying appropriate voltages to various sets of contacts 98 and contacts 112), the location of locally adjusted voltage region (in which the electric field through electrically adjustable optical material layer 104 is adjusted up or down relative to the rest of layer 104) can be varied as desired (e.g., to place a localized low transmission region in a desired location relative to clear portions of layer 104), to adjust the power of a lens and/or the location in the X-Y plane of the lens, etc.

[0043] The openings may, for example, be elongated segmented trenches such as trenches 116 of FIG. 8. Trenches 116 may extend in segmented and staggered lines that form columns extending along the Y dimension (as shown in FIG. 8) and/or segmented and staggered lines that form rows extending along the X dimension. In trenches 116, no conductive material is present, so conductivity is low (e.g., zero) and resistivity is high (e.g., infinite). Current flowing along the Y direction (in the FIG. 8 example), can travel directly along the paths between respective columns such as path 119. Current flowing generally along the X direction (in the FIG. 8 example) can travel only along meandering indirect paths such as path 118. Because paths 119 are shorter (per unit of Y dimension) than paths 118 are (per unit of X dimension), the conductivity of layer 100 is greater along the Y dimension (and sheet resistance is less) than the X dimension (e.g., the sheet resistance of layer 100 exhibits anisotropy because the sheet resistance of patterned layer 100 is less along the Y dimension than the X dimension).

[0046] If desired. W-shaped trenches may have curved shapes that form undulating W-shapes, trenches 116 may have S-shapes or other sinuous shapes (e.g., other non-straight shapes), or may have any other shapes with curved and/or straight portions. S-shaped trenches and trenches with other shapes and the spacing between trenches may be chosen to help reduce light diffraction effects and/or visibility to a user. In general, trenches 116 may have any shapes and patterns that help create electrical anisotropy while spreading out diffraction to prevent constructive interference and visual artifacts.

[0047] Contacts 98 may be formed from thin-film metal coating layers that are patterned (e.g., using lithography, etc.) on the blanket film forming electrode layer 100. Contacts 112 may likewise be formed from a patterned thin-film metal layer on layer 110. Along the edge of component 94, there is a potential for capacitive coupling across trenches 116 (e.g., when alternating-current drive signals Vapplied are being applied to component 94 to adjust transmission in a guest-host liquid crystal layer, etc.). This has the potential to lead to undesired parasitic power consumption. To help reduce or eliminate this power loss, trenches 116 may be provided with locally widened portions adjacent to the contacts. For example, in layer 100, trenches 116 may be locally widened to form locally widened portions 120 adjacent to contacts 98, as shown in FIGS. 10 and 11. The width of trenches 116 may, for example, be increased by a factor of at least 2, at least 5, 5-20, at least 10, less than 20, or other suitable amount along the X direction for a distance of at least 10 microns, at least 20 microns, 15-30 microns, less than 100 microns, or other suitable distance from the edges of contacts 98 along the Y direction.

[0049] The foregoing is merely illustrative and various modifications can be made to the described embodiments. The foregoing embodiments may be implemented individually or in any combination.