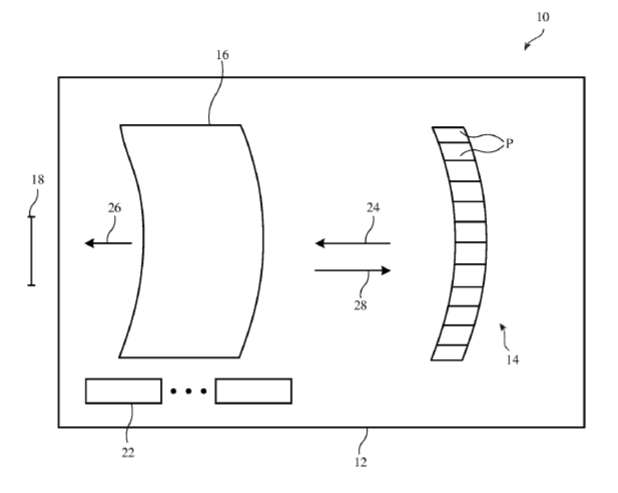 An electronic device may have a support structure that supports a display and lenses. Each lens may be a reflective lens such as a catadioptric lens that receives polarized image light from the display and provides a corresponding image to an eye box. The display may be an emissive display with pixels that include light-emitting diodes. The light-emitting diodes may be overlapped by a light recycling layer such as a reflective polarizer or cholesteric liquid crystal layer. The light recycling layer recycles emitted light to enhance display efficiency.

[0001] This application claims the benefit of provisional patent application No. 62/848,496, filed May 15, 2019, which is hereby incorporated by reference herein in its entirety.

[0006] The lens may be a reflective lens such as a catadioptric lens that receives polarized image light from the display and provides a corresponding image for viewing in an eye box. The display may have an absorptive linear polarizer through which emitted light passes to the catadioptric lens. The absorptive linear polarizer may help suppress light reflected from the lens.

[0009] FIG. 1 is a side view of an illustrative electronic device in accordance with an embodiment.

[0010] FIGS. 2 and 3 are side views of illustrative displays in accordance with embodiments.

[0011] FIG. 4 is a cross-sectional side view of pixels in an illustrative display with light blocking structures that are formed between the pixels in accordance with an embodiment.

[0012] FIG. 5 is a cross-sectional side view of an illustrative display with a diffuse reflective layer such as a layer of white material that scatters and depolarizes light in accordance with an embodiment.

[0013] FIG. 6 is a cross-sectional side view of an illustrative display having light-emitting diode pixels on a substrate such as a flexible substrate in accordance with an embodiment.

[0014] FIG. 7 is a cross-sectional side view of an illustrative display having light-emitting-diode pixels formed on a semiconductor substrate such as a silicon substrate in accordance with an embodiment.

[0015] FIG. 8 is a cross-sectional side view of an illustrative display in accordance with an embodiment.

[0016] FIG. 9 is a graph showing how light-emitting diode cavity structures may be configured to enhance light emission efficiency in accordance with an embodiment.

[0018] The electronic device may be a head-mounted device or other device that has optical components such as lenses. The lenses may be reflective lenses such as catadioptric lenses or other lenses that have multiply folded optical paths including polarizers or reflective polarizers and that are configured to use polarized input light.

[0020] A diagram of an illustrative electronic device with a display is shown in FIG. 1. Electronic device 10 may have a housing such as housing 12. Housing 12, which may sometimes be referred to as an enclosure or support structure, may be configured to be worn on a user’s head (e.g., device 10 may be a head-mounted device and housing 12 may serve as a head-mounted support structure). In this arrangement, images from display 14 may pass through lens 16 for viewing by a user’s eye located in eye box 18. There may be multiple lenses 16 and multiple sets of display pixels P for displaying images for the user’s eyes (e.g., a pair of lenses 16 and a pair of pixel groups for left and right eye boxes associated with the user’s left and right eyes). FIG. 1 shows a single eye box 18 to avoid over-complicating the drawing.

[0021] During operation, pixels P in device 14 (e.g., a layer of pixels in an array or other pattern) may be used to display images. Polarized image light 24 is emitted by display 14 and is received by reflective lens 16. Light 24 passes through lens 16 and is provided to eye box 18 as image light 26 so that a user may view the displayed images. Some of light 24 is reflected back towards display 14 from lens 16 as light 28. Display 14 is configured to suppress reflected light 28 to ensure that the images that are being viewed do not contain undesired stray light and ghost image artifacts.

[0022] Device 10 may be a head-mounted device such as a pair of glasses, goggles, a helmet, a head-mounted device based on a hat or headband structure, or other equipment that is worn on a user’s head. Other types of electronic equipment may be used in forming electronic devices such as device 10 if desired. For example, device 10 may be a wristwatch device or other device that is worn on a portion of a user’s body other than the user’s head, may be a stand-alone device that rests on a desktop or that is built into a kiosk or vehicle, or may be other suitable electronic equipment. Illustrative configurations in which device 10 is a head-mounted device may sometimes be described herein as an example.

[0023] Housing 12 may be formed from polymer, metal, glass, crystalline material such as sapphire, ceramic, fabric, fibers, fiber composite material, natural materials such as wood and cotton, other materials, and/or combinations of such materials. Housing 12 may be configured to form housing walls. The housing walls may enclose an interior region within device 10 and may separate the interior region from an exterior region surrounding device 10. Housing structures for device 10 may, if desired, include head straps and other support structures that allow device 10 to be worn by a user.

[0030] In some configurations, components 22 may include mechanical devices for gathering input (e.g., buttons, joysticks, scrolling wheels, key pads with movable keys, keyboards with movable keys, and other devices for gathering user input). During operation, device 10 may use sensors and/or other input-output devices in components 22 to gather user input (e.g., buttons may be used to gather button press input, touch and/or force sensors overlapping displays can be used for gathering user touch screen input and/or force input, touch pads and/or force sensors may be used in gathering touch and/or force input, microphones may be used for gathering audio input, etc.). The control circuitry of device 10 can then take action based on this gathered information (e.g., by transmitting the information over a wired or wireless path to external equipment, by supplying a user with output using a haptic output device, visual output device, an audio component, or other input-output device in housing 12, etc.).

[0031] If desired, electronic device 10 may include a battery or other energy storage device, connector ports for supporting wired communications with ancillary equipment and for receiving wired power, and other circuitry. In some configurations, device 10 may serve as an accessory and/or may include a wired and/or wireless accessory (e.g., a keyboard, computer mouse, remote control, trackpad, etc.).

[0032] Lens 16 may be a catadioptric lens or other reflective lens that uses polarized input light. Lens 16 may have multiple folds in its optical path. For example, an optical path may jog sideways when passing through lens 16 or may fold back and forth as light travels along the direction of the optical axis of lens 16. Lens 16 may include optical structures with polarizing properties such as polarizers, wave plates or retarders, and reflective polarizers.

[0042] FIG. 5 shows how the surface of display panel 14P may be provided with white layer 68 (e.g., a coating layer of diffuse reflective material such as hazy and/or matte white ink that scatters and depolarizes light that has been reflected inwardly toward the reflective material). Organic light-emitting diode pixels supply light through openings in this white coating layer. Light 60 that is emitted from the pixels of panel 14P may reflect backwards from layer 64 as shown in FIG. 5. When this back-reflected light reaches reflective layer 68, reflective layer 68 helps reflect (e.g., scatter) the light outwardly as unpolarized light, thereby helping to recycle emitted light and improve overall light emission efficiency. In this type of arrangement, the scattered outgoing light is not polarized, so quarter wave plate 30 of FIG. 2 may be omitted.

[0044] In the example of FIG. 7, display panel 14P has a semiconductor substrate such as silicon substrate 78. Substrate 78 may include circuitry such as transistors 76 and may use this circuitry to drive pixels 80. During operation, the circuitry of substrate 78 may, for example, supply data and control signals to pixels 80 that direct pixels 80 to display images. Pixels 80 may be crystalline semiconductor dies with light-emitting diodes or may be thin-film organic light-emitting diodes formed on substrate 78. A protective layer such as layer 82 may be formed over the layer of pixels 80 on substrate 78. Layer 82 may be, for example, a cover layer formed from glass or other clear material (e.g., a layer having a thickness of at least 100 microns, 200-500 microns, less than 700 microns, or other suitable thickness).

[0046] A cross-sectional side view of an illustrative display panel with light recycling structures is shown in FIG. 8. In the example of FIG. 8, display panel 14P includes pixel layer 86 on substrate 84. Pixel layer 86 includes an array of pixels 88 that each include a light-emitting diode. Layer 86 may be, for example, a thin-film circuitry layer and pixels 88 may include thin-film organic light-emitting diodes. To protect light-emitting diodes in pixels 88, layer 86 may be covered with a layer of encapsulation such as thin-film encapsulation layer 90. Layer 90 may include inorganic dielectric layers and/or polymer dielectric layers that block moisture. The thickness of layer 90 may be, for example, 5 microns, at least 1 micron, less than 25 microns, or other suitable thickness. An array of color filers (color filter elements) 94 of different colors (e.g., red, green, blue, etc.) may be formed in alignment with corresponding pixels 88 (if desired). Color filters 94 will tend to absorb (and thereby block) stray light from adjacent pixels of different colors. An opaque layer such as black matrix layer 92 (sometimes referred to as black ink, black masking layer material, or opaque masking material) may have an array of openings that receive respective color filters 94. Layer 92 may, if desired, include light blocking structures 66 (FIG. 4). The thickness of color filters 94 and black matrix layer 92 may be about 2 microns, at least 0.4 microns, less than 10 microns, or other suitable thickness. Quarter wave plate 100 may be coupled to the layer containing color filters 94 and black matrix layer 92 using adhesive 96. Adhesive 96 may be, for example, a layer of pressure sensitive adhesive having a thickness of 20 microns, at least 4 microns, less than 100 microns, or other suitable size.

[0049] Conventional light-emitting diode displays have cavity designs that do not maximize efficiency, but rather operate at a suboptimal operating point to enhance off-axis viewing characteristics. Curve 104 of the graph of FIG. 9 illustrates how cavity efficiency may vary as a function of cathode thickness and may peak when cathode thickness is at a particular value (e.g., thickness A in the example of FIG. 9). Conventional light-emitting diode displays are characterized by cavity thicknesses such as thickness B that result in suboptimal light emission efficiencies (see, e.g., illustrative operating point 106 for a conventional display, which is lower than the maximum possible cavity efficiency). This is done to ensure that the display has a satisfactorily wide viewing angle in comparison to displays with light-emitting diode pixels that have operating points with higher efficiency. Display panel 14P, in contrast, has light-emitting diodes that each have a cavity that includes a reflective polarizer, cholesteric liquid crystal layer, or other light recycling layer in addition to a reflective anode and partially reflective cathode. The light-emitting diodes of the pixels of display panel 14P can be configured to operate at operating point 108 of curve 104 (e.g., by using cathode thickness A). The presence of the light recycling layer in display panel 14P acts as an external cavity feature that alters the design considerations for the light emitting diodes and allows off-axis luminance to be boosted at high efficiency. As a result, panel 14P may exhibit a satisfactorily wide viewing angle while operating at a more efficient operating point than conventional displays such as operating point 108. The efficiency of display 14 in configurations in which a light recycling layer is incorporated into display 14 may be, as an example, greater than 50%, at least 55%, at least 60%, at least 70%, 50-100%, or other suitable value.

[0051] The foregoing is merely illustrative and various modifications can be made to the described embodiments. The foregoing embodiments may be implemented individually or in any combination.