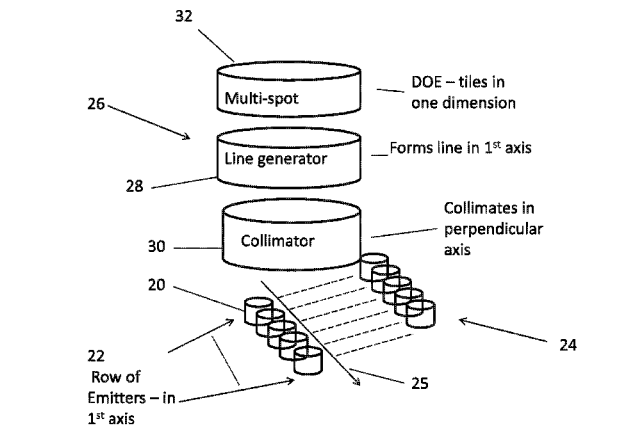 Apparatus for structured light scanning. The structured light includes one or more projected lines or other patterns. At least two independent emitters emit light for each projected line or pattern. Typically the at least two independent emitters are arranged in a row. The apparatus also includes a pattern generator for causing light from respective emitters of a given row to overlap along a pattern axis to form a projected pattern.

The present invention, in some embodiments thereof, relates to structured light sensing generation for 3D sensing and, more particularly, but not exclusively, to a structured light method and apparatus using overlapping patterns of multi-emitters.

Very generally, structured light sensing is the process of projecting a known pattern, such as a grids or horizontal bars, on to a scene. The way that the grid or bars continue or do not continue, deform and displace, when striking surfaces allows vision systems to calculate the depth and surface information of the objects in the scene. Structured light may be used in 3D scanners.

The structured light may often be invisible or imperceptible, thus allowing it to be used without users being aware of its presence.

A component of structured light devices is the creation of a light pattern that is projected onto the scene to be measured in the 3D scanning process. The prior art includes spatially structured light which is generally based on fixed patterns, and temporally structured light which is based on a dynamically changing pattern. The light pattern is created in one of two ways. In a first method a single emitter is projected through a series of optics to create a full pattern. In a second method multiple emitters are imaged or projected through optical elements such that each of the emitters creates part of the pattern.

The use of multiple emitters in the prior art can be divided into several categories. In one category, each one of the emitters is first collimated by a lenslet attached directly to the specific emitter. The far field pattern is then created from the array of collimated beams over the full field of view.

In a second category, a non-regular arrangement of emitters is first projected onto a small part of the far field as is, and then the arrangement is duplicated to cover the large field of view.

In a third category, individual diffractive optical elements are placed in front of each emitter creating a specific part of the far field pattern.

A projected pattern is generated by two or more independent emitters, and the light from each emitter is spread out along an axis of the pattern so as to cause overlap of light from different emitters. The pattern may be a line and additional rows of an array of emitters may provide additional lines to form a projection covering a block. The block is a square or rectangular tile of the pattern and the tiles may fit over the region to be scanned.

According to an aspect of some embodiments of the present invention there is provided apparatus for projected structured light using at least one projected pattern, the apparatus comprising:

a pattern generator for causing light from respective emitters to overlap along a respective pattern axis to form the projected pattern.

The term overlapping is used to indicate that points on the projected pattern receive light from at least two separate independent emitters. The emitters may be coherent in themselves but are independent in being mutually incoherent. In other words each emitter produces coherent light. However two different emitters are not coherent with each other, in other words not mutually coherent.

Typically, the at least two independent emitters may make up some or all of a row of emitters, and the pattern may be a line or a curve, or even a complex made up of sub-patterns. It is noted that the term “row” is interchangeable with column, depending on the perspective when viewing the light pattern.

In the case that the pattern is a line, a collimator may collimate light of a given row in an axis perpendicular to a line axis.

An embodiment may comprise variable numbers of operational emitters per row, thereby to provide different levels of intensity per projected line or other pattern.

In an embodiment, the rows are provided with an equal number of emitters, of which predetermined emitters in predetermined rows are switched off to provide a lower level of light intensity.

Alternatively, the rows are provided with different numbers of emitters respectively.

In an embodiment, the different number of emitters is provided by setting respective rows to different lengths and retaining a fixed distance between emitters.

In an embodiment, the different number of emitters is provided by providing a different distance between emitters in respective rows.

A diffraction element may be used to duplicate a block of the projected lines to fill a field of view.

A spacing between the rows and/or a focal length of a collimating lens may be preset to define an angular spread between the projected lines.

The independent emitters may be arranged as an emitter array, for example using a laser bar or a VCSEL array.

emitting light from independent coherent light emitters arranged in a plurality of rows; and

The method may involve collimating light of a given row in an axis perpendicular to the line axis, and/or providing different numbers of operational emitters per row so that different rows provide projected lines of differing intensity.

The method may entail duplicating a block of the projected lines one or more times to fill a field of view.

The method may involve fixing a spacing between the rows and/or a focal length of a collimating lens to define an angular spread between the projected lines.

According to a third aspect of the present invention there is provided a user interface system for operation by movements or gestures, the system comprising:

a device for structured light projecting using a plurality of projected lines, the device comprising:

respective rows of independent emitters, each row configured to generate a respective one of the projected lines; and

a line generator for causing light from respective emitters of a given row to overlap along a respective line axis to form the projected line.

According to a fourth aspect of the present invention there is provided a 3D projected light pattern comprising a projected line, the light in the projected line provided by a plurality of sources of coherent light, the sources being mutually incoherent, the light from each source being overlapped to form the respective projected line.

According to a fifth aspect of the present invention there is provided apparatus for projected structured light using a plurality of projected lines, the apparatus comprising:

a plurality of rows of independent emitters, each row configured to generate a respective the projected lines; and

a line generator for causing light from respective emitters of a given row to overlap along a respective line axis to form a corresponding one of the projected lines.

Unless otherwise defined, all technical and/or scientific terms used herein have the same meaning as commonly understood by one of ordinary skill in the art to which the invention pertains. Although methods and materials similar or equivalent to those described herein can be used in the practice or testing of embodiments of the invention, exemplary methods and/or materials are described below. In case of conflict, the patent specification, including definitions, will control. In addition, the materials, methods, and examples are illustrative only and are not intended to be necessarily limiting.

Implementation of the method and/or system of embodiments of the invention can involve performing or completing selected tasks manually, automatically, or a combination thereof. Moreover, according to actual instrumentation and equipment of embodiments of the method and/or system of the invention, several selected tasks could be implemented by hardware, by software or by firmware or by a combination thereof using an operating system.