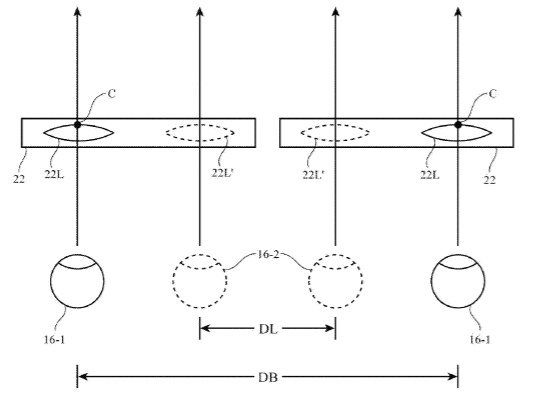 [0002] This relates generally to optical systems, and, more particularly, to devices with tunable lenses.

[0004] It can be challenging to design devices such as these. If care is not taken, the optical systems in these devices may be insufficiently flexible or may not perform satisfactorily.

[0005] An electronic device such as a head-mounted device may have one or more displays that produce images that are viewable by the eyes of a viewer through adjustable lenses. The head-mounted device may be a pair of virtual reality glasses or may be an augmented reality headset that allows a viewer to view both computer-generated images and real-world objects in the viewer’s surrounding environment.

[0008] FIG. 1 is a diagram of an illustrative electronic device in accordance with an embodiment.

[0009] FIGS. 2 and 3 are graphs showing how an adjustable lens device may be adjusted so that its refractive index varies as a function of distance to produce a desired lens profile in accordance with an embodiment.

[0010] FIGS. 4 and 5 are diagrams of an illustrative tunable lens showing how the position of the lens center may be dynamically adjusted in accordance with an embodiment.

[0011] FIG. 6 is a diagram showing how the locations of the centers of a pair of lenses may be adjusted relative to each other to accommodate different interpupillary distances for different viewers in accordance with an embodiment.

[0012] FIGS. 7 and 8 are diagrams showing how the locations of the centers of a pair of lenses may be adjusted to accommodate different directions of view through the lenses in accordance with an embodiment.

[0013] FIG. 9 is a perspective view of an illustrative adjustable lens component in accordance with an embodiment.

[0014] FIG. 10 is a diagram of illustrative electrodes in the component of FIG. 9 in accordance with an embodiment.

[0015] FIG. 11 is a set of graphs showing illustrative signals that may be applied to the electrodes of the component of FIG. 10 in accordance with an embodiment.

[0016] FIG. 12 is a graph of root mean square pixel voltage as a function of pixel position across an adjustable lens component supplied with the signals of FIG. 11 in accordance with an embodiment.

[0018] Displays 20 may be liquid crystal displays, organic light-emitting diode displays, or displays of other types. Adjustable optical elements such as adjustable lens components 22 may form lenses that allow a viewer (see, e.g., viewer eyes 16) to view images on display(s) 20. There may be two components 22 (e.g., for forming left and right lenses) associated with respective left and right eyes 16. A single display 20 may produce images for both eyes 16 or, as shown in the example of FIG. 1, a pair of displays 20 may be used to display images. As an example, displays 20 may include a left display aligned with a left component 22 and a viewer’s left eye and may include a right display aligned with a right component 22 and a viewer’s right eye. In configurations with multiple displays, the focal length and positions of the lenses formed by components 22 may be selected so that any gap present between the displays will not be visible to a user (i.e., so that the images of the left and right displays overlap seamlessly).

[0021] Display 14 may include input-output circuitry such as touch sensors, buttons, microphones to gather voice input and other input, sensors, and other devices that gather input (e.g., user input from viewer 16) and may include light-emitting diodes, displays 20, speakers, and other devices for providing output (e.g., output for viewer 16). Display 14 may, if desired, include wireless circuitry and/or other circuitry to support communications with a computer or other external equipment (e.g., a computer that supplies display 14 with image content). If desired, sensors such as an accelerometer, compass, an ambient light sensor or other light detector, a proximity sensor, a scanning laser system, and other sensors may be used in gathering input during operation of display 14. These sensors may include a digital image sensor such as camera 24. Cameras such as camera 24 may gather images of the environment surrounding viewer 16 and/or may be used to monitor viewer 16. As an example, camera 24 may be used by control circuitry 26 to gather images of the pupils and other portions of the eyes of the viewer. The locations of the viewer’s pupils and the locations of the viewer’s pupils relative to the rest of the viewer’s eyes may be used to determine the locations of the centers of the viewer’s eyes (i.e., the centers of the user’s pupils) and the direction of view (gaze direction) of the viewer’s eyes.

[0025] In the illustrative examples of FIGS. 4 and 5, pixels 22P of an illustrative component 22 have been adjusted to produce rings with refractive index profiles of the type shown in the Fresnel lens of FIG. 3. As shown in FIG. 4, the pixels of component 22 may be adjusted to produce a lens 22L with a center C that is aligned with the center of component 22. If desired, the position of center C of lens 22L within component 22 and/or other attributes of the lens 22L (e.g., focal length, corrections for distortion, etc.) may be adjusted, as shown in FIG. 5.

[0026] With one illustrative arrangement, which is shown in FIG. 6, lens adjustments are used to adjust the spacing of lenses 22L (e.g., the distance between lens centers C) to accommodate the different interpupillary distances associated with different viewers. Control circuitry 26 may measure the interpupillary distance of each viewer by capturing images of the viewer’s eyes with camera 24 or other sensors and processing the resulting eye position data to extract information on the locations of the viewers pupils.

[0028] With another illustrative arrangement, which is shown in FIGS. 7 and 8, the positions of lenses 22L (i.e., the positions of lens centers 22C and/or other lens attributes such as lens size and shape, etc.) may be adjusted in real time to accommodate changes in the viewer’s direction of view. It can be difficult to produce lenses that operate optimally over a wide range of viewing angles, so the ability to dynamically adjust lens positions may help to reduce distortion and improve image quality. In the scenario of FIGS. 7 and 8, a viewer is initially looking directly ahead in direction 28 (FIG. 7), so lenses 22L of components 22 are positioned by control circuitry 26 so that lens centers C are directly in front of eyes 16. The viewer then looks to the side in direction 30, as shown in FIG. 8. This change in direction of view may be measured using camera 24 to capture images of the viewer’s pupils and other portions of the viewer’s eyes. When the viewer’s direction of view shifts as shown in FIG. 8, the lens position of FIG. 7 will no longer be optimal. To ensure that lens performance is optimal (e.g., to minimize visual artifacts such as blur, distortion, and dispersion), components 22 may be adjusted. As shown in FIG. 8, control circuitry 26 can use camera 24 to measure the direction of view of the viewer (i.e., to analyze the viewer’s gaze) and can adjust components 22 accordingly to produce lenses 22L with lens centers C that are aligned with the viewer’s direction of view (direction 30). If desired, other lens characteristics such as lens focus (e.g., lens focal length), lens size and shape, lens attributes for minimizing optical distortion, and other lens characteristics may also be adjusted by control circuitry 26 during use of display 14. In general, control circuitry 26 can apply any suitable pixel voltages to the pixels of components 22 and any desired lenses 22L may be produced.

[0030] An array of pixels 22P (e.g., an array of pixels 22P as shown in FIGS. 4 and 5) is created by the intersections between electrodes 34 and 36. At each pixel location in component 22 where a given one of electrodes 34 overlaps with a given one of electrodes 36 (i.e., at each given pixel), a desired voltage may be applied across the liquid crystal layer by supplying a first voltage to the electrode 34 and a second voltage to the electrode 36. The liquid crystal at the intersection of these two electrodes will receive an applied electric field with a magnitude that is proportional to the difference between the first and second voltages on the electrodes. By controlling the voltages on all of electrodes 34 and all of electrodes 36, the index of refraction of each pixel 22P of component 22 can be dynamically adjusted to produce customized lenses 22L.

[0033] It may be desirable to tune pixels 22P faster than the focusing time of human vision (about 100 mS) to minimize visible tuning artifacts. Particularly in lenses with high pixel counts, it can be challenging to supply control signals to pixels 22P effectively using electrodes 34 and 36. With one illustrative arrangement, a symmetrical driving scheme that uses time-averaged voltages (sometimes referred to as a symmetrical time-voltage integral driving scheme) may be used to control pixels 22P so as to produce a satisfactory refractive index profile for lens 22 (e.g., an index profile that is symmetrical and monotonic in each half of lens 22, as shown in the index profile of FIG. 2). The use of this type of driving scheme is illustrated in FIGS. 10, 11, and 12.

[0035] Illustrative voltages for a frame of these signals are shown in the traces of FIG. 11. During operation, control circuitry 26 may apply a continuous series of these frames to component 22 to produce lens 22L. Voltage polarity may, if desired, be reversed between successive frames.

[0037] The foregoing is merely illustrative and various modifications can be made to the described embodiments. The foregoing embodiments may be implemented individually or in any combination.