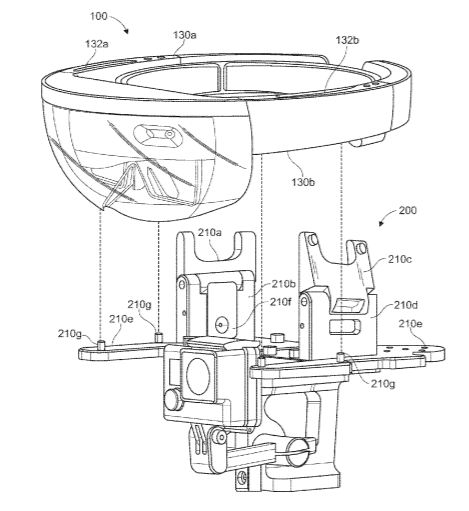 [0002] In mixed-reality capture, the built-in camera of a mixed-reality headset captures footage of a user’s view through the headset. This footage may include virtual objects, user interface elements, and portions of the user’s actual environment as described above. However, such footage is typically shaky and unsuitable for accurately representing the mixed-reality experience to a viewer. The headset may be mounted to a stable platform during mixed-reality capture to address this issue, but such an arrangement prevents live monitoring of the actual footage being captured.

[0003] FIG. 1 depicts a mixed-reality headset according to some embodiments;

[0004] FIG. 2 depicts an apparatus and a camera mounted to the apparatus according to some embodiments;

[0005] FIG. 3 illustrates mounting of a headset on an apparatus according to some embodiments;

[0006] FIG. 4 is a bottom view of a headset according to some embodiments;

[0007] FIG. 5 illustrates mounting of a headset on an apparatus according to some embodiments;

[0008] FIG. 6 depicts a mixed-reality headset mounted to an apparatus according to some embodiments;

[0009] FIG. 7 depicts an apparatus supporting a mixed-reality headset and mounted to a camera stabilization device according to some embodiments;

[0011] FIG. 9 is a bottom right view of an apparatus according to some embodiments.

[0012] The following description is provided to enable any person in the art to make and use the described embodiments. Various modifications, however, will remain apparent to those in the art.

[0015] By facilitating a substantially fixed relationship between the image capture device and the display screen of the display device, embodiments may reduce a need for recalibration of the system in response to bumping or other physical movement of the system.

[0016] Some embodiments also provide features to facilitate stabilization of the captured footage. For example, an apparatus according to some embodiments may include an interface for attaching the mixed-reality display device to a camera support system. Examples of a camera support system include but are not limited to a stabilizer, a tripod, a drone, a dolly, a slider, and a jib.

[0018] FIG. 1 is a view of wearable (i.e., head-mounted) mixed-reality device 100 according to some embodiments. Embodiments are not limited to device 100, and may utilize any past, current or future device capable of performing the functions attributed to device 100 herein.

[0019] Device 100 includes substantially transparent display screen 110 for presenting images to a wearer thereof. The images may completely occupy the wearer’s field of view, or may be presented within the wearer’s field of view such that the wearer may still view other objects in her vicinity. The images may be two-dimensional, three-dimensional, holographic, and/or any other type of presentable images that are or become known.

[0020] Device 100 also includes camera system 120 to capture images and video. The captured video may comprise mixed-reality capture footage as described above. Camera system 120 may also function as a sensor to assist, in conjunction with data from on-board accelerometers (not shown), in determining the position and motion of device 100 in three-dimensional space with six degrees of freedom.

[0021] FIG. 2 illustrates apparatus 200 to support a device such as device 100 according to some embodiments. Apparatus 200 also includes elements to support camera 300. As described above, Apparatus 200 may support a device 100 and camera 300 to maintain a substantially fixed relationship therebetween. The substantially fixed relationship may position lens 320 of camera 300 with respect to a display screen/lens of device 100 so as to acquire suitable live footage of mixed-reality video captured by device 100. Embodiments are not limited to use in conjunction with a camera having a form factor or of a type as illustrated in FIG. 2. The elements of apparatus 200 may comprise machined aluminum or any suitable one or more materials.

[0024] The second support includes rotatable element 220a, which is rotatably inserted into an opening of base 210h. Base 210h may therefore serve to couple the second support to the first support. Arm 220c is slidably inserted into element 220a and supports camera interface 220d. Interface 220d includes features to engage with corresponding features of mounting element 320 of (or coupled to) camera 300. As will be evident from the following figures and description, a position of camera lens 310 with respect to a display of device 100 may be adjusted via rotation of element 220a, sliding of arm 220c and rotation of element 320 within interface 220d, and then fixed using corresponding fixing mechanisms (e.g., screws).

[0026] Also shown in FIG. 4 are speaker elements 140a and 140b of device 100. As shown in FIG. 5, speaker elements 140a and 140b may be disposed within corresponding cutouts of apparatus 200 after device 200 is lowered onto surface 210e. FIG. 6 depicts arms 210a and 210c after being manually rotated toward surface 210e to fixedly engage elements 130a and 130b against surface 210e. Each of arms 210a and 210c may be coupled to standoffs 210b and 210d by a locking hinge which locks (or resists rotation in an opposite direction) in response to being rotated to a particular angle. The particular angle may be selected to result in secure fixing of device 100 to apparatus 200. As mentioned above, the locking hinge may comprise a quick-release mechanism to selectively unlock the hinge (e.g., prior to removing device 100 from apparatus 200).

[0032] Accessory area 210g includes screw holes to mount any suitable accessories, such as weights, battery packs, and lighting. FIG. 8 also shows screw 220e, which may be removed to allow insertion of element 320 into interface 220d and reinserted to fix element 320 therein.

[0034] Screw 220f may be loosened to allow rotational adjustment of element 220a, and screw 220g may be loosened to allow for sliding of arm 220c in and out of element 220a. Embodiments are not limited to the particular arrangement described herein for adjusting a position and an orientation of a camera with respect to other elements of apparatus 200.

[0035] The figures and descriptions herein provide examples of some embodiments. Each element described herein may be composed of any number of suitable elements, and multiple elements may be implemented by a single element where suitable. Any element described herein may be composed of any one or more suitable materials, and elements are not necessarily composed of identical materials. Elements described as performing a function or providing a characteristic may be substituted with any other one or more elements to perform the function or provide the characteristic.

[0036] Those in the art will appreciate that various adaptations and modifications of the above-described embodiments can be configured without departing from the claims. Therefore, it is to be understood that the claims may be practiced other than as specifically described herein.