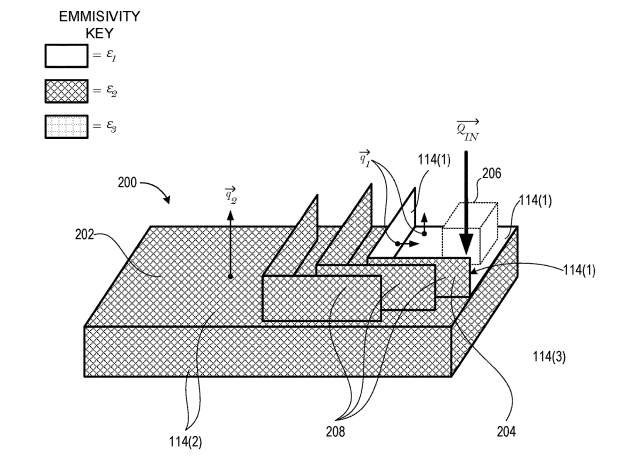 Thermal management is a key consideration in the design of compact electronic devices such as laptop computers, wearable technologies, or any other device in which spatial constraints lead to heat generating components being located in close proximity to heat-sensitive components. Such considerations challenge designers to balance the competing goals of both dissipating heat away from heat generating components while also preventing dissipated heat from adversely affecting heat-sensitive components.

It is with respect to these and other considerations that the disclosure made herein is presented.

Technologies described herein provide a vapor chamber that emits a non-uniform radiative heat flux. Generally described, the techniques disclosed herein enable modulation of surface treatment(s) on outer surface(s) of a vapor chamber to control an emissivity and, ultimately, a radiative heat flux emitted from various predetermined emissivity regions. Unlike conventional vapor chambers which emit a uniform radiative heat flux from all exposed surfaces (e.g., regardless where heat-sensitive components are located), the techniques described herein enable heat to be dissipated away from heat generating components toward specific regions of a compact electronic device which are unfettered by heat-sensitive components. In particular, the techniques described herein enable individual surface regions of a vapor chamber that face towards, or away from, heat-sensitive components to be specifically configured to emit lower, or higher, levels of radiative flux, respectively. For example, an individual surface region may be configured to have a desired emissivity through exposure to mechanical surface abrasion (e.g., surface roughening or surface polishing), oxidation techniques, anodization techniques, applying emissivity affecting layers to the individual surface region (e.g., polymer coatings, paints, etc.), or any other surface treatment technique suitable for modulating surface emissivity.