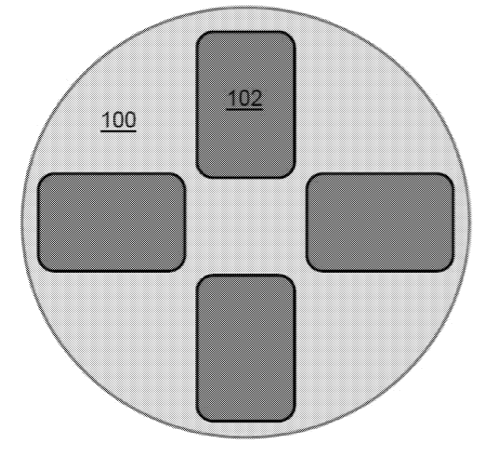 [0004] In some cases, an eyepiece layer can be patterned (e.g., with one or more light diffractive nanostructures) such that it displays received light incoupled from an external projector. Further, multiple eyepieces layers (or “waveguides”) can be used in conjunction to project a simulated three-dimensional image. For example, multiple waveguides–each having a specific pattern–can be layered, and each waveguide can relay specific light information of a portion of a volumetric image (e.g., wavelength or focal distance) such that in the aggregate of specific light information from each of the waveguides, the entire coherent volumetric image is viewable. Thus, the eyepieces can collectively present the full color volumetric image to the user across three-dimensions. This can be useful, for example, in presenting the user with a “virtual reality” environment.

[0008] Implementations of the first and second general aspects may include one or more of the following features.

[0012] Implementations of the second general aspect may include one or more of the following features.

[0019] FIG. 4 depicts TTV of a polished waveguide display substrate with a convex surface.

[0020] FIG. 5 shows a cross section of a waveguide display substrate with a biased TTV having linear (wedge) and nonlinear (dome) components.

[0023] Total thickness variation (TTV) is one metric for improving performance of an optical waveguide. As used herein, TTV generally refers to the difference between the maximum and minimum values of the thickness of the waveguide or the waveguide display substrate on which the waveguide is formed. As light travels through an optical waveguide, typically by total internal reflection, variations in the thickness alter the light propagation path(s). Angular differences in the light propagation path(s) can affect image quality with field distortions, image blurring, and sharpness loss.

[0025] Since completely flat polishing or molding, such as that depicted in FIG. 2A, requires extensive and costly processing to achieve, a certain degree of TTV is typically tolerated. With most low TTV processes for waveguide display substrates (e.g., 20 nm <TTV<2 .mu.m), there exists a thickness shape or profile to the substrates that varies (e.g., randomly) from part to part. Here, “thickness shape” generally refers to the 3D mapping of the height difference between the substrate’s top and bottom surfaces. In one example, a typical plano-convex lens has a thickness shape that is a convex spherical or positive “dome”. In another example, a meniscus lens with the same radius of curvature on each surface (e.g., non-prescription sunglasses) has a flat near-zero TTV thickness shape but each surface itself is non-flat. As waveguides are stacked to form a multi-layer multi-color waveguide display, the random thickness shape differences can cause each color channel of red, green and blue to have a different luminance uniformity pattern. Differences in luminance uniformity pattern can cause the color to vary over the field of view when the waveguide stack is illuminated with a uniform white light image. These color non-uniformities can result in poorer image quality.

[0028] Path length differences in the light propagation path(s) within a waveguide produced on a non-flat waveguide display substrate can also affect image quality with luminance pattern non-uniformities and color non-uniformities. The source of the luminance pattern non-uniformities includes electromagnetic interference patterns produced by numerous pathways through a pupil-replicating waveguide display substrate. A unit-cell of a typical pupil-replicating waveguide resembles a Mach-Zender interferometer, where there exist two pathways per unit-cell from the input to an output replicated pupil location. Pathlength differences between the two pathways are influenced by the pathlength through the thickness of the waveguide display substrate, which is defined by the TTV metric and thickness profile (whether the thickness changes linearly or quadratically and at an angle with respect to the light in total-internal-reflection within the waveguide display). If the pathlengths have equal or opposite phase, there may be constructive or destructive interference, respectively. Hence, the thickness shape may affect the magnitude within pupil-replicated copies and ultimately the output image outcoupled by the waveguide display.

[0029] Thus, it can be advantageous to minimize thickness shape variation as well as TTV. Since perfect replication may not be achieved in polishing or molding processes, certain manufacturing distributions can result. In a hypothetical distribution model, with a circular substrate shape defined by Zernike polynomials, a standard set of shape basis functions can be defined. There are even and odd Zernike polynomials.* The even ones are defined as*

* and the odd ones are defined as*

for n-m even, and are identically 0 for n-m odd.

[0036] Particular embodiments of the subject matter have been described. Other embodiments, alterations, and permutations of the described embodiments are within the scope of the following claims as will be apparent to those skilled in the art. While operations are depicted in the drawings or claims in a particular order, this should not be understood as requiring that such operations be performed in the particular order shown or in sequential order, or that all illustrated operations be performed (some operations may be considered optional), to achieve desirable results.

[0037] Accordingly, the previously described example embodiments do not define or constrain this disclosure. Other changes, substitutions, and alterations are also possible without departing from the spirit and scope of this disclosure.