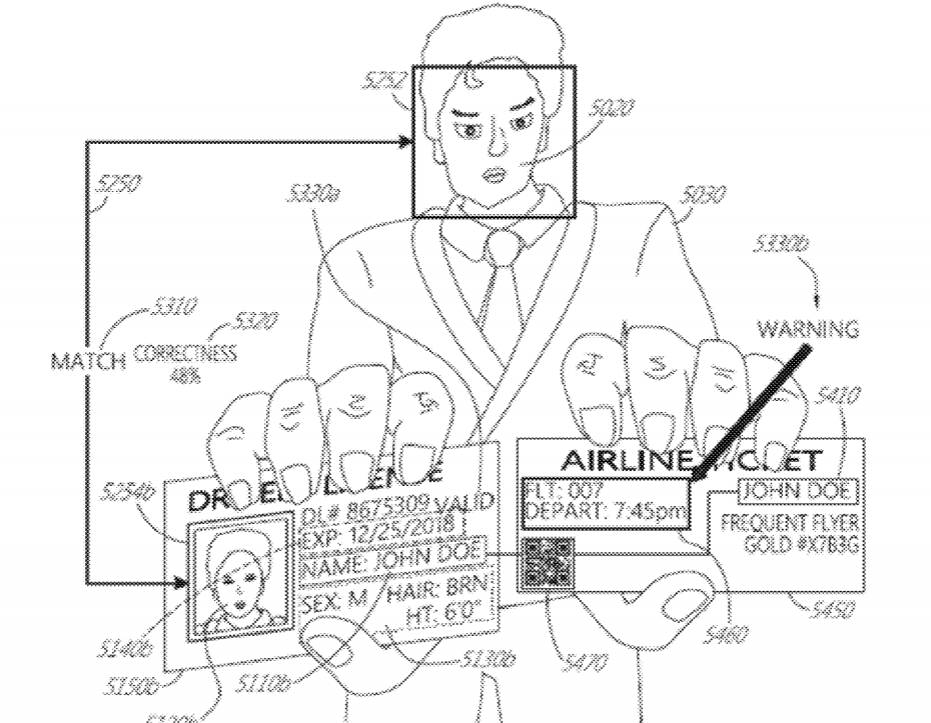 An augmented reality device (ARD) can present virtual content which can provide enhanced experiences with the user’s physical environment. For example, the ARD can detect a linkage between a person in the FOV of the ARD and a physical object (e.g., a document presented by the person) or detect linkages between the documents. The linkages may be used in identity verification or document verification.

[0003] Modern computing and display technologies have facilitated the development of systems for so called “virtual reality”, “augmented reality”, or “mixed reality” experiences, wherein digitally reproduced images or portions thereof are presented to a user in a manner wherein they seem to be, or may be perceived as, real. A virtual reality, or “VR”, scenario typically involves presentation of digital or virtual image information without transparency to other actual real-world visual input; an augmented reality, or “AR”, scenario typically involves presentation of digital or virtual image information as an augmentation to visualization of the actual world around the user; a mixed reality, or “MR”, related to merging real and virtual worlds to produce new environments where physical and virtual objects co-exist and interact in real time. As it turns out, the human visual perception system is very complex, and producing a VR, AR, or MR technology that facilitates a comfortable, natural-feeling, rich presentation of virtual image elements amongst other virtual or real-world imagery elements is challenging. Systems and methods disclosed herein address various challenges related to VR, AR and MR technology.

[0004] Various embodiments of an augmented reality system for detecting linkages among objects/people in a user’s environment or authenticating the objects/people are disclosed.

[0007] Details of one or more implementations of the subject matter described in this specification are set forth in the accompanying drawings and the description below. Other features, aspects, and advantages will become apparent from the description, the drawings, and the claims. Neither this summary nor the following detailed description purports to define or limit the scope of the inventive subject matter.

[0008] FIG. 1 depicts an illustration of a mixed reality scenario with certain virtual reality objects, and certain physical objects viewed by a person.

[0009] FIG. 2 schematically illustrates an example of a wearable system.

[0011] FIG. 4 schematically illustrates an example of a waveguide stack for outputting image information to a user.

[0012] FIG. 5 shows example exit beams that may be outputted by a waveguide.

[0015] FIG. 8 is a process flow diagram of an example of a method of rendering virtual content in relation to recognized objects.

[0017] FIG. 10 is a process flow diagram of an example of a method for determining user input to a wearable system.

[0018] FIG. 11 is a process flow diagram of an example of a method for interacting with a virtual user interface.

[0019] FIG. 12A illustrates an example of identity verification by analyzing linkages between a person and a document.

[0020] FIG. 12B illustrates an example of identity verification by analyzing linkages between two documents.

[0021] FIG. 13 is a flowchart of an example process for determining a match between a person and an identification document presented by the person.

[0022] FIG. 14 is a flowchart of an example process for determining a match between two documents.

[0023] FIG. 15 is a flowchart of example process for determining a match between a person and a plurality of documents.

[0024] Throughout the drawings, reference numbers may be re-used to indicate correspondence between referenced elements. The drawings are provided to illustrate example embodiments described herein and are not intended to limit the scope of the disclosure. Additionally, the figures in the present disclosure are for illustration purposes and are not to scale.

[0025] An augmented reality device (ARD) can present virtual content which can enhance a user’s visual or interaction experiences with the user’s physical environment. The user can perceive the virtual content in addition to the physical content seen through the ARD.

[0031] Although the examples are described with reference to an ARD, the systems and methods in the present disclosure are not required to be implemented by the ARD. For example, the systems and methods for identity and document verification may be part of a robotic system, security system (e.g., at a transportation hub), or other computing systems (such as an automatic travel check-in machine). Further, one or more features and processes described herein are not required to be performed by the ARD itself. For example, the process of extracting information from an image may be performed by another computing device (e.g., a remote server).

[0032] Also, the devices and techniques described herein are not limited to the illustrative context of security at a travel hub but can be applied in any context where it is desirable to extract information from documents, make comparisons among documents or persons, identify persons in the environment of the device, enhance security, etc. For example, a ticket taker at an amusement park or entertainment venue could use embodiments of the techniques and devices described herein to admit (or deny admittance) to patrons entering the park or venue. Similarly, a guard at a secure facility (e.g., a private laboratory or warehouse, an office building, a prison, etc.) or a police officer could use the ARD to image a person and an identification document. In yet other applications, a person viewing a number of documents through the ARD (e.g., an accountant viewing invoices, receipts, and account ledgers) can use the ability of the ARD to identify or highlight information that may exist on the documents being viewed (e.g., the accountant’s ARD can highlight documents that include a particular person’s name or expense so that the accountant can more readily reconcile a receipt to an invoice, etc.) to expedite tasks.