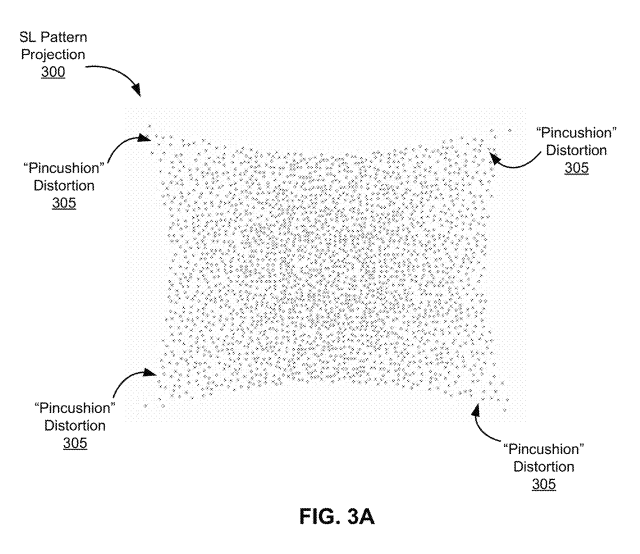 A depth camera assembly (DCA) includes a projector, a detector and a controller. The projector emits a tiled structured light (SL) pattern onto a local area. Each illumination source of the projector includes one or more light emitters and an augmented diffractive optical element (ADOE) designed with a pattern mask. The ADOE diffracts at least a portion of light beams emitted from the light emitters to form a first SL pattern projection having a field-of-view corresponding to a first tileable boundary. The pattern mask prevents projection of light that would otherwise be diffracted outside the first tileable boundary. The first SL pattern projection is combined with at least a second SL pattern projection into the tiled SL pattern illuminating objects in the local area. The detector captures images of the objects illuminated by the SL pattern. The controller determines depth information for the objects using the captured images.

The DOE-based structured light projection suffers intrinsic distortion (i.e., the pincushion like distortion) due to the law of diffraction, which increases rapidly as FOV increases. The intrinsic distortion causes overlapping of light patterns and/or voids (i.e., gaps in light patterns) when tiling multiple light projections to achieve wider FOV illumination, which leads to increased complexity of depth sensing algorithms and less efficient use of a projector power. A simple tileable projection shape is a rectangular or square shape. For achieving such a rectangular or square shape of light projection, the rectangular design pattern can be shaped on finer grids (e.g., each grid corresponding to a diffraction order) such that the projected light pattern exhibits desired rectangular shape after illuminating a DOE designed with the re-shaped rectangular light pattern. However, the distortion pre-compensation approach uses more diffraction orders in DOE design and demands more advanced fabrication process, leading to a higher price.

Embodiments of the present disclosure support a depth camera assembly (DCA). The DCA includes at least one illumination source, a detector and a controller. The at least one illumination source is configured to emit a structured light (SL) pattern onto one or more objects in a local area. The illumination sources of the DCA emit light that are diffracted by one or more augmented diffractive optical elements (ADOEs) to form corresponding SL patterns (also referred to as SL pattern projections). An ADOE is a diffractive optical element that is designed to diffract light into a SL pattern projection that has a field-of-view (FOV) corresponding to a tiling boundary (e.g., rectangular, hexagonal, square, etc.). The ADOE prevents projection of portions of the SL pattern that would otherwise lie outside the tiling boundary. In some embodiments, the ADOE is designed by, e.g., masking a design pattern such that light diffracted from the ADOE is within a FOV that is bounded by the tiling boundary, and then proceeding with a normal lithography process to form a diffractive element. The purpose of masking is to not project portions of the SL pattern that would lie outside a desired tiling boundary.

Embodiments of the present disclosure further support a head-mounted display (HMD) that integrates the DCA. The HMD further includes an electronic display and an optical assembly. The HMD may be, e.g., a virtual reality (VR) system, an augmented reality (AR) system, a mixed reality (MR) system, or some combination thereof. The electronic display is configured to emit image light. The optical assembly is configured to direct the image light to an exit pupil of the HMD corresponding to a location of a user’s eye, the image light comprising the depth information of the one or more objects in the local area determined by the DCA.

Embodiments of the present disclosure further support a station separate from a HMD, wherein the ADOE is part of an illumination source of a DCA integrated into the station. The station may be a console or some other device interfaced (through a wired or wireless connection) with the HMD. The station can perform three-dimensional depth sensing of an environment surrounding some or all of the station including a user wearing the HMD. The station may provide the depth information to the HMD, e.g., for presentation to the user.