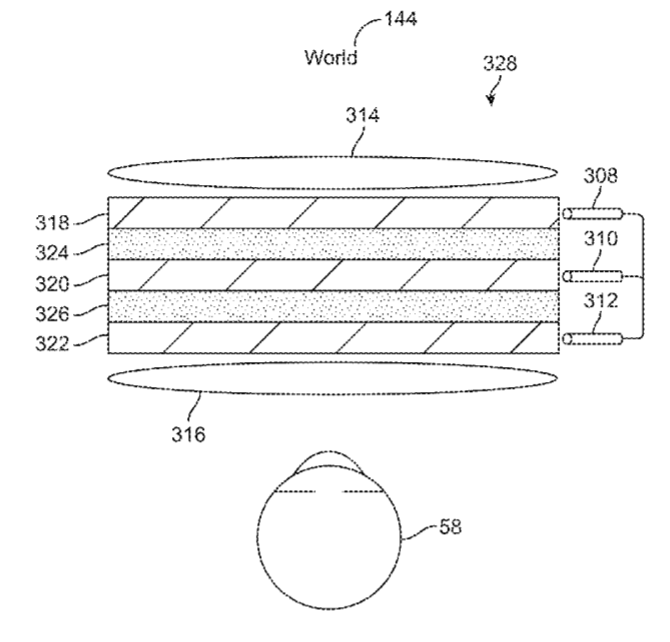 FIELD OF THE INVENTION

Modern computing and display technologies have facilitated the development of systems for so called “virtual reality” or “augmented reality” experiences, wherein digitally reproduced images or portions thereof are presented to a user in a manner wherein they seem to be, or may be perceived as, real. A virtual reality, or “VR”, scenario typically involves presentation of digital or virtual image information without transparency to other actual real-world visual input; an augmented reality, or “AR”, scenario typically involves presentation of digital or virtual image information as an augmentation to visualization of the actual world around the user. As it turns out, the human visual perception system is very complex, and producing a VR or AR technology that facilitates a comfortable, natural-feeling, rich presentation of virtual image elements amongst other virtual or real-world imagery elements is challenging.

Referring to FIG. 2A, stereoscopic wearable glasses (8) type configurations have been developed which generally feature two displays (10, 12) that are configured to display images with slightly different element presentation such that a three-dimensional perspective is perceived by the human visual system. Such configurations have been found to be uncomfortable for many users due to a mismatch between vergence and accommodation which must be overcome to perceive the images in three dimensions; indeed, some users are not able to tolerate stereoscopic configurations. FIG. 2B shows another stereoscopic wearable glasses (14) type configuration featuring two forward-oriented cameras (16, 18) configured to capture images for an augmented reality presentation to the user through stereoscopic displays. The position of the cameras (16, 18) and displays generally blocks the natural field of view of the user when the glasses (14) are mounted on the user’s head.

Referring to FIG. 2C, an augmented reality configuration (20) is shown which features a visualization module (26) coupled to a glasses frame (24) which also holds conventional glasses lenses (22). The user is able to see an at least partially unobstructed view of the real world with such a system, and has a small display (28) with which digital imagery may be presented in an AR configuration to one eye–for a monocular AR presentation. FIG. 2D features a configuration wherein a visualization module (32) may be coupled to a hat or helmet (30) and configured to present monocular augmented digital imagery to a user through a small display (34). FIG. 2E illustrates another similar configuration wherein a frame (36) couple-able to a user’s head in a manner similar to an eyeglasses coupling so that a visualization module (38) may be utilized to capture images and also present monocular augmented digital imagery to a user through a small display (40). Such a configuration is available, for example, from Google, Inc., of Mountain View, Calif. under the trade name GoogleGlass.RTM.. None of these configurations is optimally suited for presenting a rich, binocular, three-dimensional augmented reality experience in a manner that will be comfortable and maximally useful to the user, in part because prior systems fail to address some of the fundamental aspects of the human perception system, including the photoreceptors of the retina and their interoperation with the brain to produce the perception of visualization to the user.

Referring to FIG. 3, a simplified cross-sectional view of a human eye (58) is depicted featuring a cornea (42), iris (44), lens–or “crystalline lens” (46), sclera (48), choroid layer (50), macula (52), retina (54), and optic nerve pathway (56) to the brain. The macula is the center of the retina, which is utilized to see moderate detail; at the center of the macula is a portion of the retina that is referred to as the “fovea”, which is utilized for seeing the finest details, and which contains more photoreceptors (approximately 120 cones per visual degree) than any other portion of the retina. The human visual system is not a passive sensor type of system; it is configured to actively scan the environment. In a manner somewhat akin to use of a flatbed scanner to capture an image, or use of a finger to read Braille from a paper, the photoreceptors of the eye fire in response to changes in stimulation, rather than constantly responding to a constant state of stimulation. Thus motion is required to present photoreceptor information to the brain (as is motion of the linear scanner array across a piece of paper in a flatbed scanner, or motion of a finger across a word of Braille imprinted into a paper). Indeed, experiments with substances such as cobra venom, which has been utilized to paralyze the muscles of the eye, have shown that a human subject will experience blindness if positioned with his eyes open, viewing a static scene with venom-induced paralysis of the eyes. In other words, without changes in stimulation, the photoreceptors do not provide input to the brain and blindness is experienced. It is believed that this is at least one reason that the eyes of normal humans have been observed to move back and forth, or dither, in side-to-side motion in what are called “microsaccades”.

As noted above, the fovea of the retina contains the greatest density of photoreceptors, and while humans typically have the perception that they have high-resolution visualization capabilities throughout their field of view, they generally actually have only a small high-resolution center that they are mechanically sweeping around a lot, along with a persistent memory of the high-resolution information recently captured with the fovea. In a somewhat similar manner, the focal distance control mechanism of the eye (ciliary muscles operatively coupled to the crystalline lens in a manner wherein ciliary relaxation causes taut ciliary connective fibers to flatten out the lens for more distant focal lengths; ciliary contraction causes loose ciliary connective fibers, which allow the lens to assume a more rounded geometry for more close-in focal lengths) dithers back and forth by approximately 1/4 to 1/2 diopter to cyclically induce a small amount of what is called “dioptric blur” on both the close side and far side of the targeted focal length; this is utilized by the accommodation control circuits of the brain as cyclical negative feedback that helps to constantly correct course and keep the retinal image of a fixated object approximately in focus.

The visualization center of the brain also gains valuable perception information from the motion of both eyes and components thereof relative to each other. Vergence movements (i.e., rolling movements of the pupils toward or away from each other to converge the lines of sight of the eyes to fixate upon an object) of the two eyes relative to each other are closely associated with focusing (or “accommodation”) of the lenses of the eyes. Under normal conditions, changing the focus of the lenses of the eyes, or accommodating the eyes, to focus upon an object at a different distance will automatically cause a matching change in vergence to the same distance, under a relationship known as the “accommodation-vergence reflex.” Likewise, a change in vergence will trigger a matching change in accommodation, under normal conditions. Working against this reflex, as do most conventional stereoscopic AR or VR configurations, is known to produce eye fatigue, headaches, or other forms of discomfort in users.

Movement of the head, which houses the eyes, also has a key impact upon visualization of objects. Humans move their heads to visualize the world around them; they often are in a fairly constant state of repositioning and reorienting the head relative to an object of interest. Further, most people prefer to move their heads when their eye gaze needs to move more than about 20 degrees off center to focus on a particular object (i.e., people do not typically like to look at things “from the corner of the eye”). Humans also typically scan or move their heads in relation to sounds–to improve audio signal capture and utilize the geometry of the ears relative to the head. The human visual system gains powerful depth cues from what is called “head motion parallax”, which is related to the relative motion of objects at different distances as a function of head motion and eye vergence distance (i.e., if a person moves his head from side to side and maintains fixation on an object, items farther out from that object will move in the same direction as the head; items in front of that object will move opposite the head motion; these are very salient cues for where things are spatially in the environment relative to the person–perhaps as powerful as stereopsis). Head motion also is utilized to look around objects, of course.

Further, head and eye motion are coordinated with something called the “vestibulo-ocular reflex”, which stabilizes image information relative to the retina during head rotations, thus keeping the object image information approximately centered on the retina. In response to a head rotation, the eyes are reflexively and proportionately rotated in the opposite direction to maintain stable fixation on an object. As a result of this compensatory relationship, many humans can read a book while shaking their head back and forth (interestingly, if the book is panned back and forth at the same speed with the head approximately stationary, the same generally is not true–the person is not likely to be able to read the moving book; the vestibulo-ocular reflex is one of head and eye motion coordination, generally not developed for hand motion). This paradigm may be important for augmented reality systems, because head motions of the user may be associated relatively directly with eye motions, and the system preferably will be ready to work with this relationship.

Thus when placing virtual content into the augmented reality world presented with an augmented reality system, whether the object should be presented as world centric (i.e., the virtual object stays in position in the real world so that the user may move his body, head, eyes around it without changing its position relative to the real world objects surrounding it, such as a real world wall); body, or torso, centric, in which case a virtual element may be fixed relative to the user’s torso, so that the user can move his head or eyes without moving the object, but that is slaved to torso movements; head centric, in which case the displayed object (and/or display itself) may be moved along with head movements, as described above in reference to GoogleGlass; or eye centric, as in a “foveated display” configuration, as is described below, wherein content is slewed around as a function of what the eye position is.

With world-centric configurations, it may be desirable to have inputs such as accurate head pose measurement, accurate representation and/or measurement of real world objects and geometries around the user, low-latency dynamic rendering in the augmented reality display as a function of head pose, and a generally low-latency display.

The systems and techniques described herein are configured to work with the visual configuration of the typical human to address these challenges.

Embodiments of the present invention are directed to devices, systems and methods for facilitating virtual reality and/or augmented reality interaction for one or more users. In one aspect, a system for displaying virtual content is disclosed.