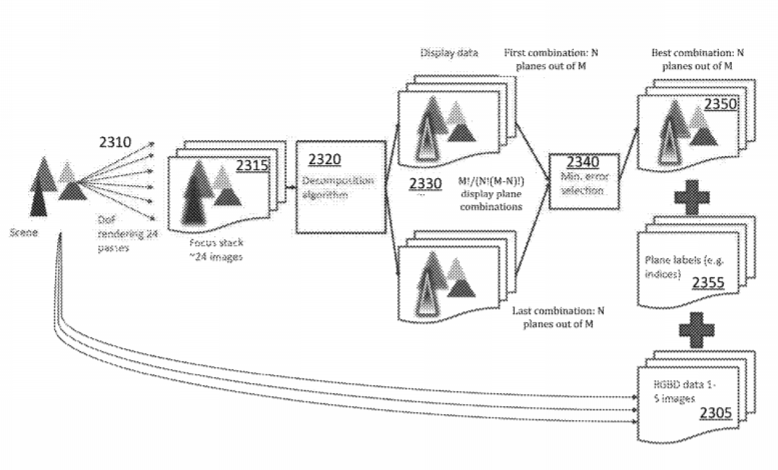 An apparatus to facilitate generating a multi-focal/multi-plane (MF/MP) display is disclosed. The apparatus comprises one or more processors to generate a plurality full resolution views for each frame of a three-dimension (3D) scene, perform deep neural network (DNN) inferencing using the plurality of full resolution views to select two or more presentation planes from among a plurality of available planes for display.

[0001] Embodiments relate generally to presentation of imagery on a multi-plane display.

BACKGROUND OF THE DESCRIPTION

[0002] A multi-focal/multi-plane (MF/MP) display is a device capable of displaying multiple images located at different distances from a viewer. In MF/MP displays, images are displayed in planes either at the same time (e.g., stack of transparent two dimensional (2D) displays+fixed optics) or one by one in a time multiplexed manner at a speed beyond a human vision flicker threshold. Generally there is a small number of such image planes (e.g., 2, 4, or 8 planes), which makes a MF/MP display significantly more technologically feasible than a volumetric display.

[0003] For example, a two-plane display may be implemented as a combination of a two-state switchable lens and a single high refresh rate display (e.g., a 120 Hz display); and a four-plane display could be implemented as a stack of two switchable lenses (each having two states) plus high refresh rate display (e.g., 240 Hz). For a 4-plane display, the lens or lens stack may be arranged in a way that shows a virtual image of the display at 3.5, 2.5, 1.5 or 0.5 diopter distance away depending on the lens state.

[0004] Implementation of a MF/MP display shows only a limited number of planes distributed within large range, which may result in disturbing visual artifacts when using naive approaches to display content located between the image planes. Including additional planes quickly becomes technically infeasible. However, it is possible to synthesize images for small number of planes to produce practically artifact-free visual effects, but computation costs are prohibitively high for real-time applications. Thus MF/MP display implementations typically involve a tradeoff between computation costs and visual quality.

[0006] FIG. 1 is a block diagram of a processing system, according to an embodiment.

[0010] FIG. 5 is a block diagram of hardware logic of a graphics processor core according to some embodiments.

[0011] FIG. 6A-6B illustrate thread execution logic including an array of processing elements employed in a graphics processor core according to some embodiments.

[0012] FIG. 7 is a block diagram illustrating a graphics processor instruction formats according to some embodiments.

[0013] FIG. 8 is a block diagram of another embodiment of a graphics processor.

[0014] FIG. 9A is a block diagram illustrating a graphics processor command format according to an embodiment.

[0015] FIG. 9B is a block diagram illustrating a graphics processor command sequence according to an embodiment.

[0016] FIG. 10 illustrates exemplary graphics software architecture for a data processing system according to some embodiments.

[0017] FIG. 11A is a block diagram illustrating an IP core development system that may be used to manufacture an integrated circuit to perform operations according to an embodiment.

[0018] FIG. 11B illustrates a cross-section side view of an integrated circuit package assembly according to some embodiments.

[0019] FIG. 12 is a block diagram illustrating an exemplary system on a chip integrated circuit that may be fabricated using one or more IP cores, according to an embodiment.

[0020] FIGS. 13A-13B are block diagrams illustrating exemplary graphics processors for use within an System on Chip (SoC), according to embodiments described herein.

[0022] FIG. 15 illustrates a machine learning software stack, according to an embodiment.

[0025] FIG. 18 illustrates training and deployment of a deep neural network.

[0027] FIG. 20 illustrates a computing device employing an image synthesis mechanism, according to an embodiment.

[0029] FIG. 21B illustrates one embodiment of a MF/MP display and a human eye viewing it.

[0030] FIGS. 22A & 22B illustrate conventional computational pipelines to implement a MF/MP display.

[0032] FIG. 24 is a flow diagram illustrating one embodiment of a process for implementing a MF/MP display.

[0033] FIG. 25 illustrates another embodiment of a MF/MP display flow.

[0034] In embodiments, an image synthesis mechanism implements a DNN to provide real-time generation of artifact-free images for MF/MP displays with focus cues. In such embodiments, the synthesis mechanism implements the DNN to perform inferencing from a set of rendered red, green, blue and depth (RGBD) views. The DNN subsequently selects a number of significant planes from among a number of available planes based on a depth variation of a central RGBD map. The view origins are distributed across an eye box plane providing sufficient parallax to preserve information about reflective/refractive properties of the displayed objects.

[0035] In the following description, numerous specific details are set forth to provide a more thorough understanding. However, it will be apparent to one of skill in the art that the embodiments described herein may be practiced without one or more of these specific details. In other instances, well-known features have not been described to avoid obscuring the details of the present embodiments.

[0037] In one embodiment, the system 100 can include, or be incorporated within a server-based gaming platform, a game console, including a game and media console, a mobile gaming console, a handheld game console, or an online game console. In some embodiments, the system 100 is a mobile phone, smart phone, tablet computing device or mobile Internet device. The processing system 100 can also include, couple with, or be integrated within a wearable device, such as a smart watch wearable device, smart eyewear device, augmented reality device, or virtual reality device. In some embodiments, the processing system 100 is a television or set top box device having one or more processors 102 and a graphical interface generated by one or more graphics processors 108.

[0040] In some embodiments, one or more processor(s) 102 are coupled with one or more interface bus(es) 110 to transmit communication signals such as address, data, or control signals between processor 102 and other components in the system 100. The interface bus 110, in one embodiment, can be a processor bus, such as a version of the Direct Media Interface (DMI) bus. However, processor busses are not limited to the DMI bus, and may include one or more Peripheral Component Interconnect buses (e.g., PCI, PCI Express), memory busses, or other types of interface busses. In one embodiment the processor(s) 102 include an integrated memory controller 116 and a platform controller hub 130. The memory controller 116 facilitates communication between a memory device and other components of the system 100, while the platform controller hub (PCH) 130 provides connections to I/O devices via a local I/O bus.

[0042] In some embodiments the platform controller hub 130 enables peripherals to connect to memory device 120 and processor 102 via a high-speed I/O bus. The I/O peripherals include, but are not limited to, an audio controller 146, a network controller 134, a firmware interface 128, a wireless transceiver 126, touch sensors 125, a data storage device 124 (e.g., hard disk drive, flash memory, etc.). The data storage device 124 can connect via a storage interface (e.g., SATA) or via a peripheral bus, such as a Peripheral Component Interconnect bus (e.g., PCI, PCI Express). The touch sensors 125 can include touch screen sensors, pressure sensors, or fingerprint sensors. The wireless transceiver 126 can be a Wi-Fi transceiver, a Bluetooth transceiver, or a mobile network transceiver such as a 3G, 4G, or Long Term Evolution (LTE) transceiver. The firmware interface 128 enables communication with system firmware, and can be, for example, a unified extensible firmware interface (UEFI). The network controller 134 can enable a network connection to a wired network. In some embodiments, a high-performance network controller (not shown) couples with the interface bus 110. The audio controller 146, in one embodiment, is a multi-channel high definition audio controller. In one embodiment the system 100 includes an optional legacy I/O controller 140 for coupling legacy (e.g., Personal System 2 (PS/2)) devices to the system. The platform controller hub 130 can also connect to one or more Universal Serial Bus (USB) controllers 142 connect input devices, such as keyboard and mouse 143 combinations, a camera 144, or other USB input devices.

[0044] FIG. 2 is a block diagram of an embodiment of a processor 200 having one or more processor cores 202A-202N, an integrated memory controller 214, and an integrated graphics processor 208. Those elements of FIG. 2 having the same reference numbers (or names) as the elements of any other figure herein can operate or function in any manner similar to that described elsewhere herein, but are not limited to such. Processor 200 can include additional cores up to and including additional core 202N represented by the dashed lined boxes. Each of processor cores 202A-202N includes one or more internal cache units 204A-204N. In some embodiments each processor core also has access to one or more shared cached units 206.

[0045] The internal cache units 204A-204N and shared cache units 206 represent a cache memory hierarchy within the processor 200. The cache memory hierarchy may include at least one level of instruction and data cache within each processor core and one or more levels of shared mid-level cache, such as a Level 2 (L2), Level 3 (L3), Level 4 (L4), or other levels of cache, where the highest level of cache before external memory is classified as the LLC. In some embodiments, cache coherency logic maintains coherency between the various cache units 206 and 204A-204N.

[0050] The exemplary I/O link 213 represents at least one of multiple varieties of I/O interconnects, including an on package I/O interconnect which facilitates communication between various processor components and a high-performance embedded memory module 218, such as an eDRAM module. In some embodiments, each of the processor cores 202A-202N and graphics processor 208 use embedded memory modules 218 as a shared Last Level Cache.