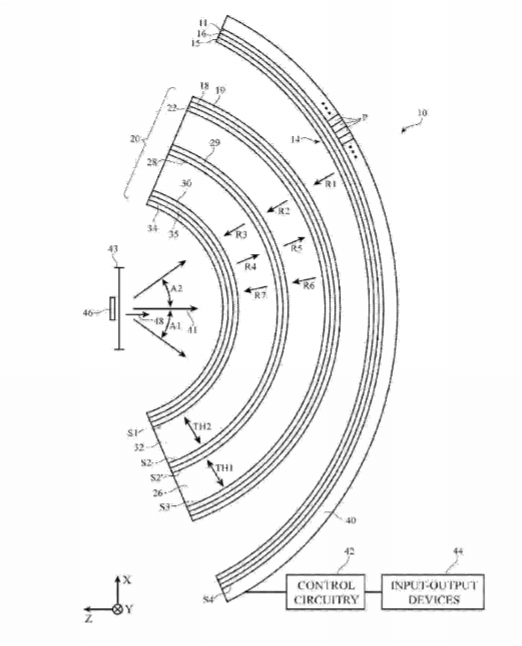 [0003] Lenses may sometimes be used to allow a viewer to view a nearby display. For example, electronic devices such as virtual reality glasses use lenses to display images for a user.

[0004] If care is not taken, lenses and other optical components in these electronic devices may be bulky and heavy and may not exhibit satisfactory optical performance.

[0008] FIG. 1 is a diagram of an illustrative head-mounted device in accordance with an embodiment.

[0009] FIG. 2 is a graph in which modeled field curvature values have been plotted versus viewing angle for a lens in accordance with an embodiment.

[0010] FIG. 3 is a graph in which the modulus of the optical transfer function for a lens has been plotted as a function of spatial frequency in accordance with an embodiment.

[0011] FIG. 4 is a front view of a portion of an illustrative device in accordance with an embodiment.

[0012] FIG. 5 is a cross-sectional side view of a portion of an illustrative display in a device with a variable pressure chamber to adjust display curvature in accordance with an embodiment.

[0014] An illustrative system that includes an electronic device such as a head-mounted device is shown in FIG. 1. As shown in FIG. 1, electronic device 10 (e.g., a head-mounted device with support structures configured to be worn on the head of a user such as glasses, goggles, a helmet, hat, etc.) may include a display system with one or more displays 40 (e.g., a display for each of a user’s eyes such as eye 46). A single display 40 is shown in FIG. 1. Systems with a pair of displays 40 may present images to a user’s left and right eyes simultaneously.

[0015] Display 40 has an array of pixels P (pixel array 14) that present images to a user (see, e.g., user eye 46, which is viewing display 40 in direction 48 through an optical system based on catadioptric lens 20). Pixel array 14 of display 40 may be based on a liquid crystal display, an organic light-emitting diode display, an emissive display having an array of crystalline semiconductor light-emitting diode dies, and/or displays based on other display technologies. In a preferred embodiment, the display is a self emitting display, which can be more compact since illumination optics are not required. Separate left and right displays may be included in device 10 for the user’s left and right eyes. Each display such as display 40 of FIG. 1 may be spherically (or aspherically) curved, e.g., surface S4 of display 40, which faces eye 46, may be concave.

[0025] Surface S3 may have significant curvature, so the use of a coating process may help ensure satisfactory formation of quarter wave plate 18. With one illustrative configuration, quarter wave plate 18 may be a liquid-crystal-based retarder layer (e.g., a birefringent coating formed from liquid crystals in a liquid polymer binder that is applied to surface S3 on top of layer 22 by spin coating or other suitable deposition techniques followed by ultraviolet light curing and/or thermal curing). In either embodiment, associating a quarter wave plate (15 or 18) with a linear polarizer 16 will cause the image light entering the lens 20 to be circularly polarized provided that the fast axis of the quarter wave plate is oriented at 45 degrees to the pass axis of the linear polarizer 16.

[0034] The configuration of FIG. 1 (e.g., the curved concave emitting surface S4 of display 40) may help improve optical performance for device 10. As an example, curved surface S4 may help reduce field curvature across the displayed field of view so that the user is presented an image with more uniform sharpness. Field curvature (in diopters D or m.sup.-1) for the arrangement of FIG. 1 has been modeled and plotted as a function of light ray angle A (e.g., angle A1 and A2) relative to axis 48 in the graph of FIG. 2. As shown by curves 50 (tangential) and 52 (sagittal), field curvature may be less than 0.15 diopters across all expected angles of view (e.g., 0-80.degree. in the example of FIG. 2). In FIG. 3, the modulus of the optical transfer function for lens 20 has been plotted as a function of spatial frequency. Curve 58 represents the diffraction limit. Curves 54 and 56, which correspond to light rays oriented at an angle A of 80.degree. with respect to axis 41 of FIG. 1, respectively show how tangential light and sagittal light may exhibit satisfactory transfer function values and therefore shows how lens 20 exhibits satisfactory optical performance at large field angles. The curved concave emitting surface S4 of the display 40 also reduces the cone angle of image light at each surface. FIG. 1 shows that the image light (R1 to R7) is provided such that the chief ray angle at surfaces S4, S3, S2 and S1 is less than 10 degrees from normal. By reducing the angular range that the linear polarizer, quarter wave plate, partially reflective mirror coating and reflective polarizer need to operate with, the performance of the films and coatings can be greatly improved so that image contrast is increased and ghosting is reduced.

[0036] Support structures 60 may be formed from plastic, metal, fiber-composite materials such as carbon-fiber materials, wood and other natural materials, glass, other materials, and/or combinations of two or more of these materials.

[0039] An illustrative configuration that may be used in device 10 to adjust the curvature of display 40 is shown in FIG. 5. As shown in FIG. 5, display 40 may be mounted in a support structure such as frame 62. Frame 62 may have an opening that receives display 40 so that an air-tight cavity such as cavity 64 is formed behind display 40. A pump (or diaphragm actuator) such as pump 66 may receive control signals from control circuitry 42 via control input 68. In response to control signals from control circuitry 42, pump 66 may increase or decrease the pressure of air or other gas or fluid in cavity 64. Increases in pressure will tend to flatten display 40 so that display 40 is more planar. Decreases in pressure will tend to bow display 40 in the -Z direction so that display 40 is more curved and less planar. Adjustments to the curvature of display 40 and/or the spacing between display 40 and lens 20 may also be made using piezoelectric actuators or other actuators having structures that expand and contract in response to changes in applied voltage, using shape memory alloys, using electromagnetic actuators, using servomotors, other actuators, and/or other display curvature adjusting device. The use of a display curvature adjusting device such as a pressure-based actuator is illustrative.

[0040] In embodiments, the lens is comprised of two or more dome lenses with films or coatings on each surface.

[0041] The foregoing is merely illustrative and various modifications can be made to the described embodiments. The foregoing embodiments may be implemented individually or in any combination.