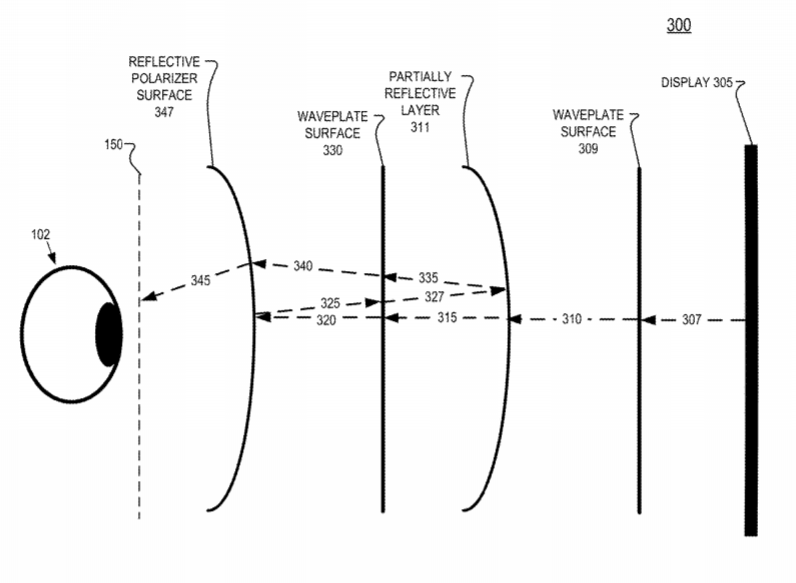 [0002] This disclosure relates generally to optics, and in particular to optical assemblies for Head Mounted Displays.

[0003] An optical assembly can be included in a head mounted display (HMD) in order to focus image light emitted from a display to an eye of a user that wears the HMD. Improvements to the optical assembly that provide an enhanced user experience are desirable.

[0004] Non-limiting and non-exhaustive embodiments of the invention are described with reference to the following figures, wherein like reference numerals refer to like parts throughout the various views unless otherwise specified.

[0005] FIG. 1 illustrates an example optical system that includes a display and a lens assembly including a first optical element and a second optical element, in accordance with an embodiment of the disclosure.

[0006] FIG. 2 illustrates an example optical system that includes a display and a lens assembly including a first optical element and a second optical element, in accordance with an embodiment of the disclosure.

[0007] FIG. 3 illustrates an example optical path for display light propagating through optical elements, in accordance with an embodiment of the disclosure.

[0009] FIG. 5 illustrates an optical system that includes example optical paths of display light, in accordance with an embodiment of the disclosure.

[0010] Embodiments of an optical assembly are described herein. In the following description, numerous specific details are set forth to provide a thorough understanding of the embodiments. One skilled in the relevant art will recognize, however, that the techniques described herein can be practiced without one or more of the specific details, or with other methods, components, materials, etc. In other instances, well-known structures, materials, or operations are not shown or described in detail to avoid obscuring certain aspects.

[0012] Throughout this specification, several terms of art are used. These terms are to take on their ordinary meaning in the art from which they come, unless specifically defined herein or the context of their use would clearly suggest otherwise.

[0013] The optical assemblies that are described in this disclosure utilize a partially reflective layer on a first optical element reflecting display light to a curved reflective polarizer on a second optical element. The disclosed optical assembly may be utilized to focus image light for an eye of a user of a head mounted display (HMD) and correct for field curvature. These and other embodiments are described in more detail associated with FIGS. 1-5.

[0015] Optical element 110 includes a refractive optical element having a first side 113 and a second side 115 that is flat. The refractive optical element may be made of refractive material 114. Refractive material 114 may include, plastic, glass, poly-methyl methacrylate (PMMA), or other acrylic. A partially reflective layer 111 is disposed on first side 113. In one embodiment, partially reflective layer 111 is a mirrored surface configured to transmit approximately 50% of incident light and reflect approximately 50% of incident light. In the illustrated embodiment, first side 113 has a curvature to provide optical power.

[0016] Quarter-waveplate (QWP) 120 is also included in first optical element 110, in the illustrated embodiment. QWP 120 may be laminated to the flat second side 115 with an index matching bonding material matched to material 114, in some embodiments. QWP 120 is configured to shift the polarization axis of incident light by .pi./4 (45 degrees). Therefore, incident linearly polarized light may be converted to circularly polarized light by QWP 120. Likewise, incident circularly polarized light may be converted to linearly polarized light by QWP 120. QWP 120 may be made of birefringent materials such as quartz, organic material sheets, or liquid crystal, for example. In one embodiment, QWP 120 is designed to be a so called “zero order waveplate” so that the retardance imparted by the QWP 120 remains close to a quarter of a wave independent of the wavelength and angle of incidence of incoming light.

[0022] Configuration that include the curved reflective polarizer 147 disposed on a curvature such as curvature 143 or 145 in the second optical element 140/240 may assist in correcting for field curvature and improving pupil swim. Curvatures 143 and 145 may be relatively shallow curvatures. Changes in the location of the eye within an eyebox area may result in distortion in the content being presented to the user. This undesirable effect is referred to as “pupil swim.” Providing a curved reflective polarizer (e.g. curved reflective polarizer 147) opposite a partially reflective layer (e.g. partially reflective layer 111) in a pancake lens configuration may reduce pupil swim significantly in the context of an HMD. Similarly, less interpupillary distance (IPD) sensitivity and less vertical disparity (if optical system is canted) may be achieved. Furthermore, providing a partially reflective layer 111 allows for improved manufacturability of lens assemblies of the disclosure that include QWP 120 since waveplate surfaces are generally manufactured as flat elements that could be laminated to a flat surface 115.

[0023] In one embodiment, a center-to-edge thickness ratio of optical elements 110, 140, and/or 240 are less than four to one for injection molding fabrication purposes. In one embodiment, the sag to diameter ratio of the curved reflective polarizer 147 is less than 0.1. In embodiments of the disclosure, the radius of curvature 113 that the partially reflective layer 111 is disposed on and the radius of curvature that curved reflective polarizer 147 is disposed on (either curvature 143 or 145) have the same sign such that in reflection, curvature 113 is concave and focuses/converges rays while the curvature that the curved reflective polarizer 147 is disposed on is convex and diverges rays. This combination may assist in compensating for field curvature. In one embodiment, the total track of the disclosed optical assemblies is less than 23 mm (first lens vertex to display). In embodiments of the disclosure, the field curvature of the system is less than 1 diopter for the full field. Pupil swim in display space may be less than 10 display pixel pitch for all gaze angles. In angle/eye space, pupil swim may be less than 30 arcmin for all gaze angles.

[0027] Viewing structure 440 may include a display for directing image light to a wearer of HMD 400. The display may include the properties of displays 105/305.

[0029] In one illustrative example, these types of optical systems can work for a range of display panel sizes between 1.4” and 2.5” diagonal, for a VR field of view of at least 85 degrees along the horizontal side (nasal to temporal). If the panel size is much smaller than 1.4” diagonal, performance may degrade, and the optical system may not be able to support a large enough eye-box and/or field of view. If the panel size is much bigger than 2.5” diagonal, a flat reflective polarizer layer may suffice to provide satisfactory performance.

[0031] A “memory” or “memories” described in this disclosure may include one or more volatile or non-volatile memory architectures. The “memory” or “memories” may be removable and non-removable media implemented in any method or technology for storage of information such as computer-readable instructions, data structures, program modules, or other data. Example memory technologies may include RAM, ROM, EEPROM, flash memory, CD-ROM, digital versatile disks (DVD), high-definition multimedia/data storage disks, or other optical storage, magnetic cassettes, magnetic tape, magnetic disk storage or other magnetic storage devices, or any other non-transmission medium that can be used to store information for access by a computing device.