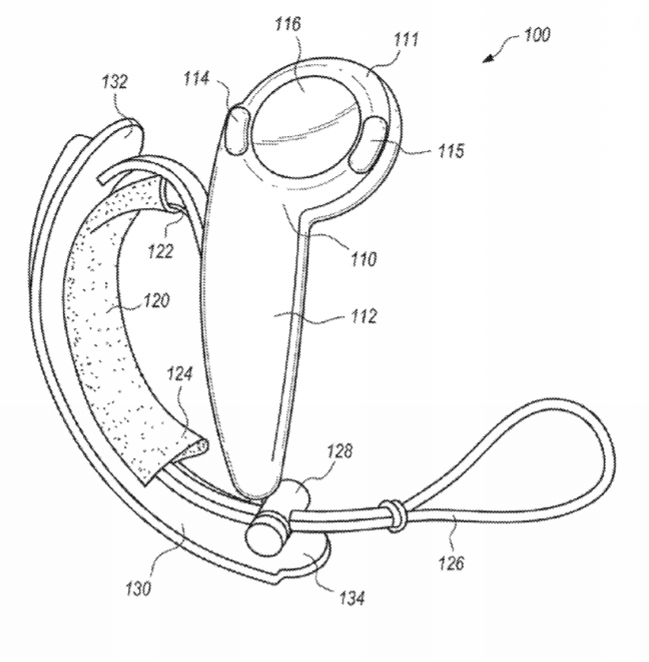 [0002] The video game industry has become large and important, and has spawned many innovations in both software and related hardware. Various hand-held video game controllers have been designed, manufactured, and sold, for a variety of game applications. Some of those innovations have applicability outside of the video game industry, such as for controllers of industrial machines, defense systems, robotics, etc. Virtual reality (VR) systems are an application of great contemporary interest and rapid technical advancement, both within and outside of the video game industry. The controllers for VR systems have to perform several different functions, and meet strict (and sometimes competing) design constraints, often while optimizing certain desired characteristics like ease of use, etc. Hence, there is a need in the art for an improved controller design that may improve VR systems and/or better facilitate user operation.

[0003] FIG. 1 depicts a controller according to an example embodiment of the present invention, with a hand retainer in an open position.

[0007] FIG. 5 depicts a pair of controllers according to an example embodiment of the present invention, with hand retainers in an open position.

[0009] In the embodiment of FIGS. 1-4, the controller body 110 may include a distal head (between the handle portion 112 and a distal end 111), which may optionally include one or more thumb-operated controls 114, 115, 116. For example, a tilting button, or any other button, knob, wheel, joystick, or trackball may be considered as a thumb-operated control if it may be conveniently manipulated by a user’s thumb during normal operation while the controller 100 is held in the hand of the user.

[0013] In other embodiments, the tracking arc 130 and the controller body 110 may be fabricated from an IR-transmissive plastic, with an outer IR-opaque coating to reduce undesired internal IR reflections. In such embodiments, the outer IR-opaque coating may include openings over the locations of the infrared (IR) light sensors to create windows above them. The response of the plurality of tracking sensors may be communicated back to the electronic system, and the system may interpret such response to effectively track the location and orientation of the controller 100.

[0017] The hand retainer 120 optionally may be adjustable in length, for example by including a draw cord 126 that is cinched by a spring-biased chock 128. The draw cord 126 may optionally have an excess length that may be used as a lanyard. The sheath 124 optionally may be attached to the draw cord. In certain embodiments, the curved resilient member 122 may be preloaded by the tension of the cinched draw cord 128. In such embodiments, the tension that the curved resilient member 122 imparts to the hand retainer 120 (to bias it in the open position) causes the hand retainer to automatically open when the draw cord 128 is un-cinched. This disclosure also contemplates alternative conventional ways to adjust the length of a hand retainer 120, such as a cleat, an elastic band (that temporarily stretches when the hand is inserted, so that it applies elastic tension to press against the back of the hand), a hook & loop strap attachment that allows length adjustment, etc.

[0020] When the hand retainer 120 (e.g. a hand-retention strap) is closed tightly, it may serve not only to prevent the controller 100 from falling out of hand, but also to keep fingers from excessively translating relative to the proximity sensor array of the handle portion 112, to more reliably sense finger motion. The electronic system may include an algorithm embodying anatomically-possible motions of fingers, to better use the sensing from the proximity sensor array to render the opening of a controlled character’s hand, finger pointing, or other motions of fingers relative to controller or relative to each other. In this way, the user’s movement of the controller 100 and/or fingers may help control a VR gaming system, defense system, medical system, industrial robot or machine, or another device. In VR system applications (e.g. for gaming, training, etc.), the system may render a throwing motion based on the movement of the tracking sensors, and may render the release of a thrown object based on the sensed release of the user’s fingers from the outer surface of the handle portion of the controller.

[0021] Hence, the function of the hand retainer 120 (to allow the user to “let go” of the controller 100 without the controller 100 actually separating from the hand or being thrown or dropped to the floor) may enable additional functionality of the controlled electronic system. For example, if the release and restoration of the user’s grasp of the handle portion 112 of the controller body 110 is sensed, then such release or grasping may be incorporated into the game to display (e.g. in VR) throwing or grasping objects. The hand retainer 120 may allow such a function to be accomplished repeatedly and safely. For example, the location of the hand retainer 120 in the embodiment of FIGS. 1-4 may help the tracking arc 130 to protect back of user’s hand from impacts in real world, for example when the user moves in response to a prompt sensed in the VR environment (e.g. while practically blinded by VR goggles).

[0024] The invention is described with reference to specific exemplary embodiments herein, but those skilled in the art will recognize that the invention is not limited to those. It is contemplated that various features and aspects of the invention may be used individually or jointly and possibly in a different environment or application. The specification and drawings are, accordingly, to be regarded as illustrative and exemplary rather than restrictive. For example, the word “preferably,” and the phrase “preferably but not necessarily,” are used synonymously herein to consistently include the meaning of “not necessarily” or optionally. “Comprising,” “including,” and “having,” are intended to be open-ended terms.