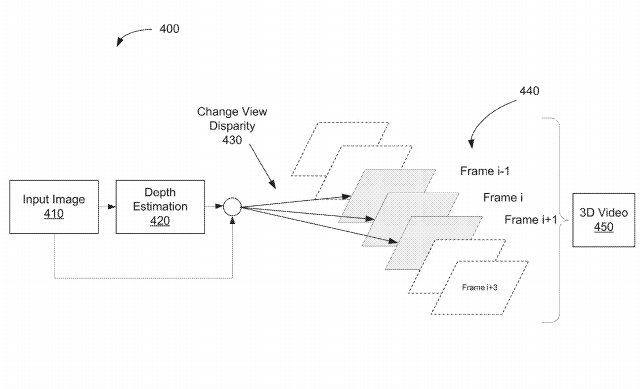 Advances in display technology have caused display devices capable of conveying a stereoscopic perception of three-dimensional (3D) depth to a view to become increasingly common. These 3D displays may be found in high-definition (HD) television sets, gaming devices, and other computing devices. The growing number of 3D displays has led to a need for additional 3D visual content (e.g., images, video). Conventionally, creating 3D content has been a difficult and time consuming process. This typically includes a lengthy, highly technical and expensive manual process. Conversion of two-dimensional (2D) images to 3D video has been performed; however, conventional conversion techniques use at least two images of the same subject, from different viewpoints, to create each frame in the resulting 3D video. In addition, conventional techniques are limited to converting specific types of images and may not be used for general 2D to 3D conversion tasks.

In one implementation, a depth value is determined for each of a plurality of pixels in an image by identifying a color value for each pixel, and identifying an estimated depth value that is associated with the color value. The color values may be defined, for example, using the Y-Cb-Cr color scheme or some other color scheme. The depth values for each pixel can be combined together to form a depth map. The modified image can be created by filtering the depth map, calculating a pixel shift for pixels in a modified image based on the depth values and the view disparity, and removing or filling in voids in the resulting modified image. At least one of a smoothing filter or a sharpening filter can be used to refine the depth map. Calculating a pixel shift for each of a plurality of pixels can be done by applying depth values and the view disparity to a view rendering algorithm. The output of the view rendering algorithm may define a pixel shift value for each pixel in the input image. In the modified image, pixels may be removed that are hidden from view due to the change in view disparity or added if they are visible.