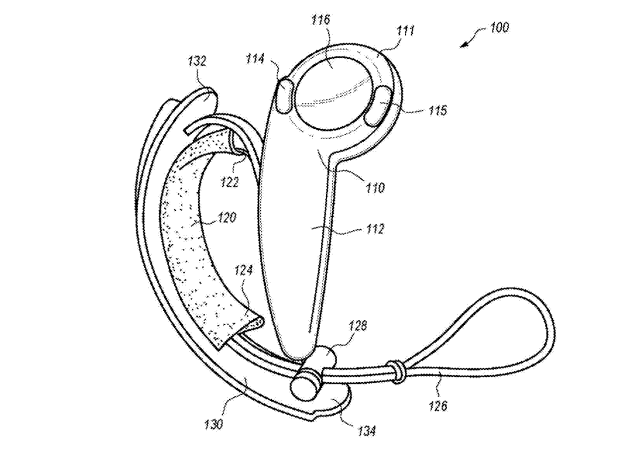 A controller includes a body having a handle, and an array of proximity sensors spatially distributed on, in, beneath, or near the outer surface of the handle, responsive to a proximity of a user’s fingers to that outer surface. A finger tracker converts the output of the array of proximity sensors to a set of joint angles corresponding to a plurality of the user’s fingers. The controller may include a renderer for processing the joint angles to deform a hand mesh that is rendered for display. Values may be calculated to facilitate normalization of the output of the proximity sensor array and thereby generate a set of normalized finger detection data. This data may be processed through curl logic to produce a linear estimate of gross finger curl with respect to the user and thereby generate a set of estimates for a plurality of finger joint angles for the user.

Various hand-held video game controllers have been designed, manufactured, and sold, for a variety of game applications. Some innovations in hand-held controller technology have applicability outside of the video game industry, such as for controllers of industrial machines, defense systems, robotics, etc. Virtual reality (VR) systems are an application of great contemporary interest and rapid technical advancement, both within and outside of the video game industry. Controllers for VR systems are designed to perform several different functions and meet strict (and sometimes competing) constraints, often while optimizing certain desired characteristics such as ease of use and user-defined configurability, for example.

In the exemplary environment of HMDs typically used in some VR systems, a human user wears a head-mounted virtual reality apparatus that includes displays in close proximity to each of the user’s eyes, headphones or other sound-producing devices in or near the user’s ears, and one or more hand-held controllers. FIG. 1 is an exemplary diagram of a human user (10) wearing a head-mounted VR display apparatus (22) comprising optical receivers and sensors (23a, 23b, 23c, etc.) that may be used for tracking the position and orientation of the VR display apparatus. Without limitation, HMD’s may be tethered to a stationary computer (such as a personal computer (“PC”), laptop, or game console), or alternatively may be self-contained (i.e., with some or all sensory inputs, controllers/computers, and outputs all housed in a single head-mounted device).

However, the ability to detect and display specific details regarding the position of the user (or parts of the user), the HMD, one or more of the hand-held control devices that may be in use, or any other aspect of the real physical environment depends on the specific configuration of any sensors and tracking systems that are deployed in the HMD VR system. For example, as is well known to skilled artisans, accurate representation of the position and orientation of the HMD and of the associated controllers requires use of appropriate object tracking technology. Similarly, accurate detection and/or representation of where the user may be directing his or her gaze may require use of appropriate eye-tracking technology.

To further improve a user’s experiences with systems such as VR HMDs, it would be advantageous to provide better solutions for tracking and displaying the position of one or more of a user’s fingers as the user moves his or her fingers relative to a part (such as the handle portion) of a control device that the user holds during a VR session.

Hence, there is a need in the art for improved controller designs and techniques that may improve systems such as VR HMDs and/or better facilitate user operation by providing new finger tracking and/or gesture detection solutions.