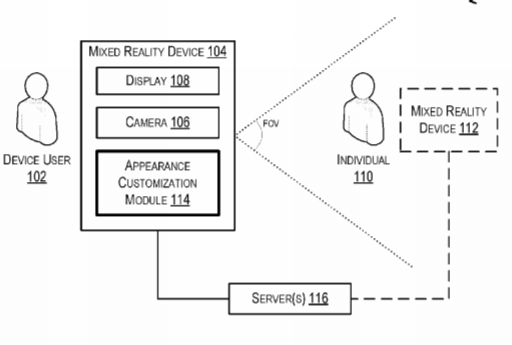 Mixed reality, also known as hyper reality, refers to the integration of physical (i.e., real-world) and virtual (i.e., computer-generated) objects in an environment presented to a user such that the physical and virtual objects appear to co-exist and affect/influence each other in real-time. Mixed reality is typically enabled via a wearable or mobile device that includes a camera for capturing the user’s real-world surroundings and a display for presenting the mixed reality environment to the user. Examples of such devices include headsets, smartphones, smartglasses, and the like.

In many mixed reality applications, a user that is wearing/using a mixed reality device will observe and interact with other real-world individuals, such as people within the vicinity of the device user, as part of the mixed reality experience provided by the application. Accordingly, it would be desirable to have features that leverage mixed reality to enrich these person-to-person interactions.

FIG. 1 is a simplified block diagram of a system environment according to certain embodiments.

FIG. 3 depicts a workflow for rendering wearable customizations according to certain embodiments.

FIG. 4 depicts a workflow for rendering floating customizations according to certain embodiments.

FIG. 5 is a simplified block diagram of a computing device according to certain embodiments.

In the following description, for purposes of explanation, numerous examples and details are set forth in order to provide an understanding of various embodiments. It will be evident, however, to one skilled in the art that certain embodiments can be practiced without some of these details, or can be practiced with modifications or equivalents thereof.

The foregoing and other aspects of the present disclosure are described in further detail below.

FIG. 1 is a simplified block diagram of a system environment 100 in which embodiments of the present disclosure may be implemented. As shown, system environment 100 includes a user 102 (referred to as a “device user”) operating a mixed reality device 104 for the purpose of engaging in a mixed reality experience provided by device 104. Mixed reality device 104 may be, e.g., a headset, a pair of smartglasses, a smartphone, a tablet, or any other type of electronic device that is capable of capturing a real-time video feed of its real-world surroundings via a camera 106 and enabling device user 102 to view these surroundings, along with virtual elements/objects, on or through a display 108.

In one set of embodiments, display 108 may be a transparent display which device user 102 can see through to view his or her real-world surroundings. In these cases, virtual objects may be rendered on the display in a manner that causes those objects to overlap the user’s view of the real world. In other embodiments, display 108 may be a non-transparent display, such as a conventional OLED or LCD screen. In these cases, mixed reality device 104 may composite virtual objects into the real-time video feed captured via camera 106 and present this video feed on display 108 to device user 102.

With this appearance customization capability, users can advantageously control how they appear in mixed reality environments and thus express their personal style and preferences in a visual way to other mixed reality users. This is particularly useful in social applications where such personal expression in an inherent part of the experience, as well as in video games where users may want to assume the identities of in-game characters.

FIG. 2 depicts a high-level workflow 200 that can executed by mixed reality device 104 of FIG. 1 (using appearance customization module 114) for customizing the appearance of individual 110 to device user 102 according to certain embodiments. Workflow 200 assumes that individual 110 has selected or defined one or more such customizations via a user interface (e.g., a web portal or mobile application) and that these customizations have been saved on server(s) 116.

At block 202, mixed reality device 104 can first detect the presence of individual 110 in the field of view of the device. This step can be accomplished by applying one or more known image processing techniques for detecting a human face or figure on the images/video captured via camera 106.

However, if mixed reality device 104 determines that individual 110 is associated with one or more appearance customizations, device 104 can retrieve definitions of the associated customizations (e.g., 3D meshes, textures, etc.) from server(s) 116 (block 208), if they have not yet been retrieved already. As part of this step, mixed reality device 104 may locally cache the retrieved definitions so that they can be more quickly accessed in the future.

For wearable customizations such as clothing and accessories, the rendering performed at block 210 can leverage skeletal tracking techniques to track, in real-time, the body movement of individual 110 and dynamically adjust the positioning/deformation of the customizations so that they appear to be properly overlaid on the individual as he/she moves through the environment. In addition, mixed reality device 104 can scale the wearable customizations so that they match the body proportions of the individual. This process is described in section (4) below.

FIG. 3 depicts a workflow 300 that can be performed by mixed reality device 104 for rendering a wearable customization for individual 110 (per block 210 of FIG. 2) according to certain embodiments.

The skeletal animation rig, which comprises joints/bones and weights that define how the movement of one joint/bone affects other joints/bones, can be predefined by an animator or may be generated by the skeletal tracking software itself (to avoid any discrepancies between the tracked joint data and the animation rig).

As part of block 308, mixed reality device 104 can scale the customization mesh in accordance with the bones of the skeletal animation rig, thereby ensuring that the mesh is properly sized with respect to the rig and thus individual 110.

Upon presenting the rendered mesh on display 108, mixed reality device 104 can determine updated joint data for individual 110 (block 314), update the positioning/pose of the skeletal animation rig based on the updated joint data (block 316), and return to block 310 to re-render/re-display the customization mesh. Finally, device 104 can repeat blocks 310-316 in a continuous loop, which will cause the wearable customization to move/deform in real-time in display 108 in accordance with the movements of the skeletal animation rig (and thus, the movements of individual 110).

FIG. 4 depicts a workflow 400 that can be performed by mixed reality device 104 for rendering a floating customization for individual 110 (per block 210 of FIG. 2) according to certain embodiments.

Starting with block 402, mixed reality device 104 can determine real-time position data for a predefined point on individual 110’s body (e.g., the individual’s head). This can be achieved via skeletal tracking or other techniques, such as recognizing and tracking the individual’s face.

At block 404, mixed reality device 104 can place the floating customization at an offset from the point determined at block 402, where the offset is defined as part of the customization. For example, a floating animal familiar may be positioned slightly down and to the left of the individual’s head, while a halo may be positioned directly above the individual’s head.

At blocks 406 and 408, mixed reality device 104 can render and display the customization within display 108. Device 104 can then determine an updated position for individual 110 (block 410) and translate/rotate the floating customization accordingly (block 412). In certain embodiments, this translation/rotation can be performed by (1) calculating a movement direction vector (M) for individual 110 by subtracting the individual’s previous position (i.e., M=P.sub.n-P.sub.n-1) from the individual’s most recent position (P.sub.n), and (2) updating the position/rotation of the customization mesh to move and face in the direction of M.

Finally, mixed reality device can repeat blocks 406-412 in a continuous loop so that the floating customization will appear to follow individual 110 on display 108 as the individual moves through the environment.

In addition to the various aspects described above, certain implementations of the present disclosure may also include the following features/enhancements.

Bus subsystem 504 can provide a mechanism for letting the various components and subsystems of computing device 500 communicate with each other as intended. Although bus subsystem 504 is shown schematically as a single bus, alternative embodiments of the bus subsystem can utilize multiple busses.

User interface input devices 512 can include a keyboard, pointing devices (e.g., mouse, trackball, touchpad, etc.), a touch-screen incorporated into a display, audio input devices (e.g., voice recognition systems, microphones, etc.) and other types of input devices. In general, use of the term “input device” is intended to include all possible types of devices and mechanisms for inputting information into computing device 500.

Storage subsystem 506 includes a memory subsystem 508 and a file/disk storage subsystem 510. Subsystems 508 and 510 represent non-transitory computer-readable storage media that can store program code and/or data that provide the functionality of embodiments of the present disclosure.

Memory subsystem 508 includes a number of memories including a main random access memory (RAM) 518 for storage of instructions and data during program execution and a read-only memory (ROM) 520 in which fixed instructions are stored. File storage subsystem 510 can provide persistent (i.e., non-volatile) storage for program and data files, and can include a magnetic or solid-state hard disk drive, an optical drive along with associated removable media (e.g., CD-ROM, DVD, Blu-Ray, etc.), a removable or non-removable flash memory-based drive, and/or other types of storage media known in the art.

It should be appreciated that computing device 500 is illustrative and other configurations having more or fewer components than device 500 are possible.

The above description illustrates various embodiments of the present disclosure along with examples of how aspects of these embodiments may be implemented. The above examples and embodiments should not be deemed to be the only embodiments, and are presented to illustrate the flexibility and advantages of the present disclosure as defined by the following claims. For example, although certain embodiments have been described with respect to particular process flows and steps, it should be apparent to those skilled in the art that the scope of the present disclosure is not strictly limited to the described flows and steps. Steps described as sequential may be executed in parallel, order of steps may be varied, and steps may be modified, combined, added, or omitted. As another example, although certain embodiments have been described using a particular combination of hardware and software, it should be recognized that other combinations of hardware and software are possible, and that specific operations described as being implemented in software can also be implemented in hardware and vice versa.

The specification and drawings are, accordingly, to be regarded in an illustrative rather than restrictive sense. Other arrangements, embodiments, implementations and equivalents will be evident to those skilled in the art and may be employed without departing from the spirit and scope of the present disclosure as set forth in the following claims.