Patent: Prediction And Throttling Adjustments Based On Application Rendering Performance 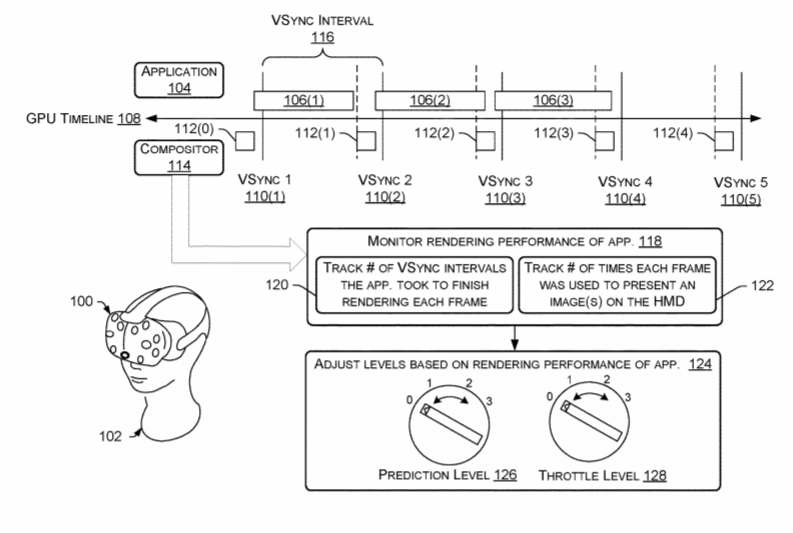 Described herein are techniques for adjusting a prediction level and a throttle level, as frames are being rendered on a head-mounted display (HMD), based on an application’s rendering performance. The prediction level is increased if a number of late frames, out of a past N rendered frames of (N being any suitable number), meets or exceeds a threshold number of late frames, which causes a compositor of the HMD to predict pose data of the HMD farther out into the future. The throttle level can be increased independently from, or in synchronization with, the increase in the prediction level to causes the compositor to throttle the frame rate of the application (e.g., to a fraction of the refresh rate of the HMD). The prediction level (and the throttle level, if at the same level) can be decreased if a particular number of consecutively-rendered frames finish rendering early.

[0001] This patent application is a continuation of and claims priority to co-pending and co-owned U.S. patent application Ser. No. 16/056,277, filed Aug. 6, 2018, entitled “PREDICTION AND THROTTLING ADJUSTMENTS BASED ON APPLICATION RENDERING PERFORMANCE,” which is hereby incorporated in its entirety by reference.

[0002] Virtual reality (VR) systems are used both within and outside of the video game industry. Displays for VR systems, such as those embedded in a VR headset, typically operate at a minimum refresh rate that is suitable for VR applications. For instance, 90 Hertz (Hz) is a common refresh rate for VR displays. In a “live rendering” scenario, a graphics-based application, such as a video game, outputs frames for rendering at a frame rate that matches the refresh rate of the display, meaning that a new frame received from the application (referred to herein as an “actual frame”) is displayed at every screen refresh. Such a live rendering scenario is often referred to as the application “making frame rate” or “hitting frame rate.”

[0004] Although rotation-only re-projection mitigates in-game stuttering or hitching, it produces its own unwanted visual artifacts during head rotation, at least in VR systems that use low-persistence displays (e.g., where the display is illuminated for a small fraction of the frame time). For example, although rotation-only re-projection accounts for head rotation, it does not account for objects that move or animate in the scene between frames. This can cause an unwanted visual artifact called “judder” to occur with respect to moving or animating objects. Judder causes the user to perceive a “double ghosting effect” where a moving object (e.g., a bullet or a ball moving across the screen) appears to bounce between two locations (or separate from itself) frame-to-frame. Accordingly, when the user rotates his/her head while re-projection is being used, any moving or animating objects in the scene will judder. Because the rendering performance of the application is unpredictable, the frame rate of the application tends to move in and out of phase with the vertical synchronization (VSync) signals of the display by varying amounts and at random times, and the aforementioned judder of moving objects can become erratic and intolerable to the viewing user.

[0005] Provided herein are technical solutions to improve and enhance these and other systems.

[0007] FIG. 1 is a diagram illustrating an example technique for adjusting prediction and throttling levels based on the rendering performance of an application.

[0008] FIG. 2 is a diagram conceptually illustrating example ring buffers that may be used to store statistics relating to an application’s rendering performance, the statistics usable to determine whether and when to adjust prediction and throttling levels.

[0009] FIGS. 3A and 3B illustrate a flow diagram of an example process for determining whether and when to increase prediction and throttling levels while rendering frames on a head-mounted display (HMD), in accordance with embodiments disclosed herein.

[0010] FIG. 4 a flow diagram of an example process for determining whether and when to decrease prediction and throttling levels while rendering frames on a HMD, in accordance with embodiments disclosed herein.

[0011] FIG. 5 illustrates example components of a wearable device, such as a VR headset, in which the techniques disclosed herein can be implemented.

[0012] Described herein are, among other things, techniques for adjusting a prediction level and a throttle level, as frames are being rendered on a head-mounted display (HMD), based on an application’s rendering performance. The adjustments to the prediction level and the throttle level mitigate unwanted visual artifacts that can manifest in the images presented on the HMD when the application’s performance degrades (e.g., when the application fails to make frame rate).

[0013] A HMD may be worn by a user for purposes of immersing the user in a virtual reality (VR) environment or an augmented reality (AR) environment. One or more display panels of the HMD render images based on frames that are output by an application (e.g., a video game), and these images are viewed by a user through the optics that are included in the HMD, making the user perceive the images as if the user was immersed in a VR or AR environment. As mentioned, the HMD may utilize a technique called “re-projection” to compensate for the application failing to make frame rate. For example, re-projected frames can be rendered between actual frames to achieve an ideal frame rate, and each re-projected frame can be generated using pixel data from a recently-rendered actual frame that was received from an application (e.g., the most recently-rendered actual frame). In the re-projected frame, a scene rendered in the previous actual frame is transformed (e.g., through rotation and re-projection calculations) in a way that accounts for the user’s head rotation. If the application’s rendering performance degrades to a certain point and/or erratically, unwanted visual artifacts, such as judder, can manifest in a manner that is intolerable to a viewing user.

[0015] An example reason for adjusting the prediction level in this manner is as follows. If an application is not making frame rate (e.g., taking multiple VSync intervals to render each frame), then an individual frame is used multiple times to display images to the user. Furthermore, displaying frames at a time other than the time it was predicted for causes the compositor to use re-projection to mitigate judder. However, re-projection does not account for objects that move or animate in the scene between frames, so prediction helps to mitigate the unwanted visual artifacts that are caused by the use of re-projection in this context. In an illustrative example, if frames are taking two VSync intervals to render, then most likely the frames will also be used twice to display images to the user. Since the predicted poses used to render an individual frame target a single time, that time is only correct for one of the two times the frame is used to present an image to the user. That said, it is possible for the time to be incorrect for both times it is used. For instance, if pose data for a given frame was predicted one VSync interval in the future, and the application took two VSync intervals to render the frame, then the frame will be used twice for generating two re-projected frames. By increasing the prediction level to predict pose data one additional VSync interval in the future (e.g., two VSync intervals), the pose data will be correct the first time the frame is used, and, in this scenario, the frame will be used a single time (instead of twice) for a single re-projected frame.