Patent: Vertical-Cavity Surface-Emitting Laser For Near-Field Illumination Of An Eye 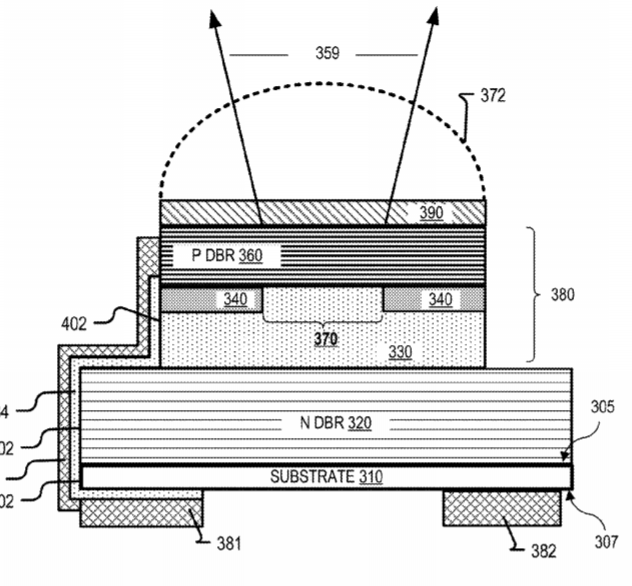 [0003] In some instances, a vertical-cavity surface-emitting laser (VCSEL) may be utilized as the illumination source of the eye-tracking system. However, conventional VCSEL structures are typically designed for applications other than eye-tracking, such as for fiber optic communications and laser printers. The design requirements for these other applications often results in a VCSEL structure that is less than optimal or less effective when incorporated into an eye-tracking system.

[0004] Non-limiting and non-exhaustive aspects of the present disclosure are described with reference to the following figures, wherein like reference numerals refer to like parts throughout the various views unless otherwise specified.

[0005] FIG. 1A illustrates a head mounted display (HMD), in accordance with aspects of the present disclosure.

[0006] FIG. 1B illustrates a footprint of a vertical-cavity surface-emitting laser (VCSEL), in accordance with aspects of the present disclosure.

[0007] FIG. 2 illustrates an eye-tracking system, in accordance with aspects of the present disclosure.

[0008] FIG. 3 illustrates an example block diagram of a VCSEL structure, in accordance with aspects of the present disclosure.

[0009] FIG. 4 illustrates an example block diagram of a VCSEL structure, in accordance with aspects of the present disclosure.

[0010] FIG. 5 illustrates an example block diagram of a VCSEL structure, in accordance with aspects of the present disclosure.

[0011] Various aspects and embodiments are disclosed in the following description and related drawings to show specific examples relating to vertical-cavity surface-emitting laser (VCSEL) for near-field illumination of an eye of a user of a head mounted device. Alternate aspects and embodiments will be apparent to those skilled in the pertinent art upon reading this disclosure and may be constructed and practiced without departing from the scope or spirit of the disclosure. Additionally, well-known elements will not be described in detail or may be omitted so as to not obscure the relevant details of the aspects and embodiments disclosed herein.

[0013] FIG. 1A illustrates an example head mounted display (HMD) 100 that includes an array of VCSELs 150 emitting infrared light in an eyebox direction, in accordance with an embodiment of the disclosure. HMD 100 includes frame 114 coupled to arms 111A and 111B. Lenses 121A and 121B are mounted to frame 114. Lenses 121A and 121B may be prescription lenses matched to a particular wearer of HMD or non-prescription lenses.

[0014] An HMD, such as HMD 100 is one type of head mounted device, typically worn on the head of a user to provide artificial reality content to a user. Artificial reality is a form of reality that has been adjusted in some manner before presentation to the user, which may include, e.g., virtual reality (VR), augmented reality (AR), mixed reality (MR), hybrid reality, or some combination and/or derivative thereof.

[0015] In FIG. 1A, each lens 121A/121B includes a waveguide 160A/160B to direct image light generated by a display 130A/130B to an eyebox area for viewing by a wearer of HMD 100. Display 130A/130B may include an LCD, an organic light emitting diode (OLED) display, micro-LED display, quantum dot display, pico-projector, or liquid crystal on silicon (LCOS) display for directing image light to a wearer of HMD 100.

[0017] Lenses 121A/121B may appear transparent to a user to facilitate augmented reality or mixed reality where a user can view scene light from the environment around her while also receiving image light directed to her eye(s) by waveguide(s) 160. Lenses 121A/121B may include an optical combiner 170 for directing reflected infrared light (emitted by VCSELs 150) to an eye-tracking camera (e.g. camera 190). The array of VCSELs 150 may be disposed on a transparent substrate and could also be included advantageously in a VR headset where the transparent nature of the optical structure allows a user to view a display in the VR headset. In some embodiments of FIG. 1A, image light is only directed into one eye of the wearer of HMD 100. In an embodiment, both displays 130A and 130B are included to direct image light into waveguides 160A and 160B, respectively.

[0018] Lens 121B includes an array of VCSELs 150 arranged in an example 5.times.5 array. The VCSELs 150 in the array may be unevenly spaced, in some embodiments. VCSELs 150 may be infrared light sources directing their emitted light in an eyeward direction to an eyebox area of a wearer of HMD 100. VCSELs 150 may emit an infrared light having a wavelength of 850 nm or 940 nm, for example. Very small metal traces or transparent conductive layers (e.g. indium tin oxide) may run through lens 121B to facilitate selective illumination of each VCSEL 150. Lens 121A may be configured similarly to the illustrated lens 121B.

[0027] Conventional VCSEL structures are configured in a flip chip arrangement where the two contacts may be on the same side as the emission beam. Or, one contact may be disposed on the bottom of a conventional VCSEL structure while a second top contact allows for a wire bond to establish the second electrical connection. Notably, in the illustrated embodiments of FIGS. 3 and 4, the two contacts are arranged on one side of the VCSEL structure 300/400 that is opposite of the emission side of beam 359. For example, N-doped DBR 320 is shown as being disposed on a first side 305 of the semiconductor substrate 310, whereas both electrical contacts 381 and 382 are disposed on a second side 307 of the semiconductor substrate 310 (e.g., second side 307 is opposite the first side 305).

[0028] In different embodiments, VCSEL 300 and/or VCSEL 400 may be configured to generate a diverging infrared beam 359. In conventional applications of VCSELs, a narrow beam is desirable. For example, in telecommunication applications, a converging narrow beam assists to increase optical efficiency of fiber optic propagation where the VCSEL is coupled to the fiber optic. Thus, in some conventional applications, an optical element (e.g., wafer level lens) may be incorporated into the conventional VCSEL to produce a narrow or converging beam. However, in eye-tracking applications, the diverging beam may be advantageous to broadly illuminate an eye which is in the near-field (e.g. within 50 mm of the VCSEL). The epitaxial layer of the VCSEL structure 300/400 may be customized to achieve a broad emission cone, for example. The spacing of the P-doped DBR 360 with respect to the N-doped DBR 320 may be changed to manipulate the beam shape of beam 359, in some embodiments. In one embodiment, the aperture definition layer 340 may be adjusted to narrow or expand the aperture 370 to manipulate the beam shape of diverging infrared beam 359 to the desired diverging beam. In addition, the illustrated examples of VCSEL structure 300/400 are shown as including a wafer-level optic 372, which may be configured to direct the diverging infrared beam 359 to illuminate the eye of the user. That is, even with wafer level optic 372, the resultant light generated by the VCSEL structure 300/400 is diverging.