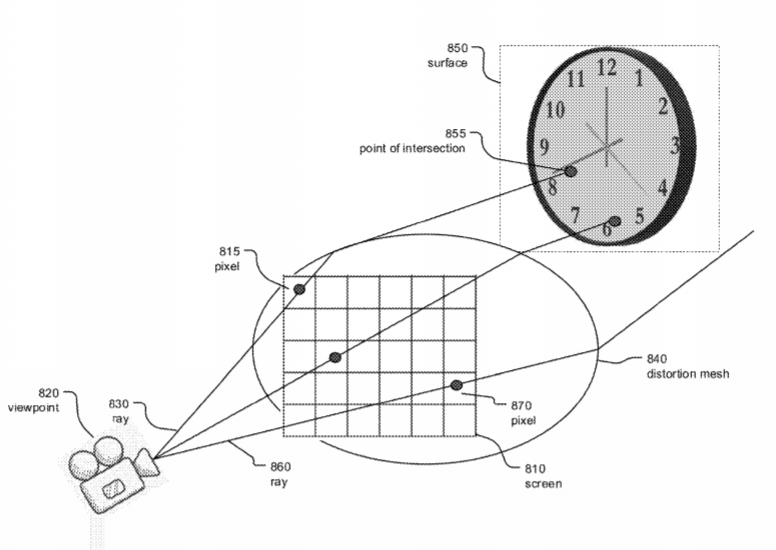 [0002] This disclosure generally relates to generating graphics for an artificial reality scene.

[0003] Artificial reality involves the display of computer-generated graphics to a user in an immersive manner. The goal is to cause the user to experience the computer-generated graphics as though they existed in the world before them. Rendering computer-generated graphics for artificial reality is a computationally-intensive task, often requiring expensive and specialized hardware. This is due at least in part to the requirement that the graphics displayed to the user must be very high quality. For a user to believe that the graphics represent, or are a part of, the world around them, the graphics must be believably high quality. The screen-door effect, where either the graphics or the display used to project the graphics allow the user to see lines between pixels can ruin any sense of immersion. Furthermore, graphics for artificial reality scenes are often interactive–when a user “moves” in the virtual space, the space moves with or in response to them. Latency between a user’s movement, or movement command, and displaying the effects of that movement can cause great discomfort to the user, such as virtual-reality sickness. Because a user’s movements are typically unpredictable, pre-rendering most components of an artificial reality scene is impractical.

[0007] The display engine may comprise a pixel block that efficiently determines a pixel color value for one or more pixels of the display. The pixel block may receive intersection information from the transform block (e.g., intersections between the cast rays and object primitives). The pixel block may reference texture data associated with the object primitive to perform bilinear interpolation for one or more of the pixel color values.

[0012] FIG. 2 illustrates an example high-level architecture for a display engine.

[0019] FIG. 9 illustrates an example method for generating graphics with a display engine of an artificial reality system.

[0024] One way that artificial reality experiences can augment human ability is with computer-generated images and/or text added to the real world, as in an augmented or mixed reality. From this simple principle, a variety of compelling use cases can be considered. Labels (e.g., texts, glyphs, etc.) or images describing a real-world object may be fixed in the world space (e.g., location-aware labels acting as street signs or providing a live map of a bike path), or images fixed to a real-world object as it moves through the space (e.g., a label added to a bus as it going on its route that provides detailed information about its route or capacity). Labels could also be used to help a user navigate through an unfamiliar city (e.g., creating a waypoint for the nearest restroom), or help find a friend in a crowd (e.g., a socially-aware waypoint fixed to another user). Other experiences worth considering may be based on interactions with real-world objects. For example, a user could “project” video onto a wall or screen that allows for the video to be played and visible to only herself or to others with access to a shared augmented space. As another example, a user could fix computer-generated text to a physical object to act as an augmented-reality book or magazine. Content could be displayed relative to the object (allowing a user to physical asset aside an augmented-reality) or could be displayed in a fixed relation to the user’s (e.g., a tutorial video constantly playing in a corner of the view). Presented media could be customized to the user, so that the same content display space could content relevant to each person viewing the same physical space. As another example, a user could interact with computer-generated graphics by “touching” an icon, or “manipulating” the computer-generated images manually. These graphics could be shown to multiple users working on a project, enabling opportunities for team collaboration (e.g., multiple architects working on a three-dimensional digital prototype in a building together in real-time).